When Charlotte Condit Parker arrived at Portsmouth’s Greenvale Farm in 1918, she found the once-proud homestead that had been built by her uncle more than a half century earlier in ruins. … 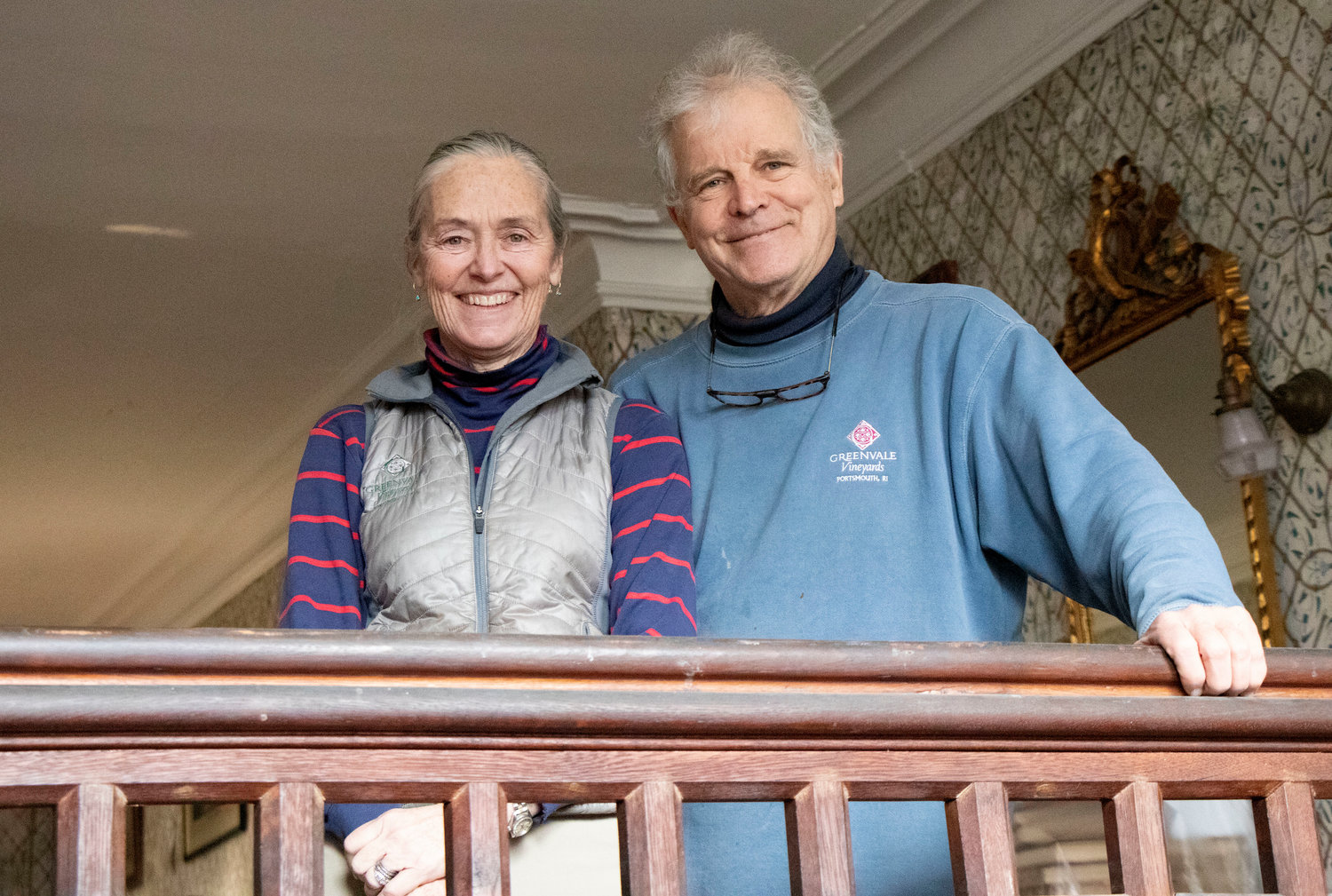 Nancy and Bill Wilson are shown on the second floor of their home. The diamond pattern on the wallpaper is a prevalent design theme throughout the property.
Photos by Richard W. Dionne Jr. 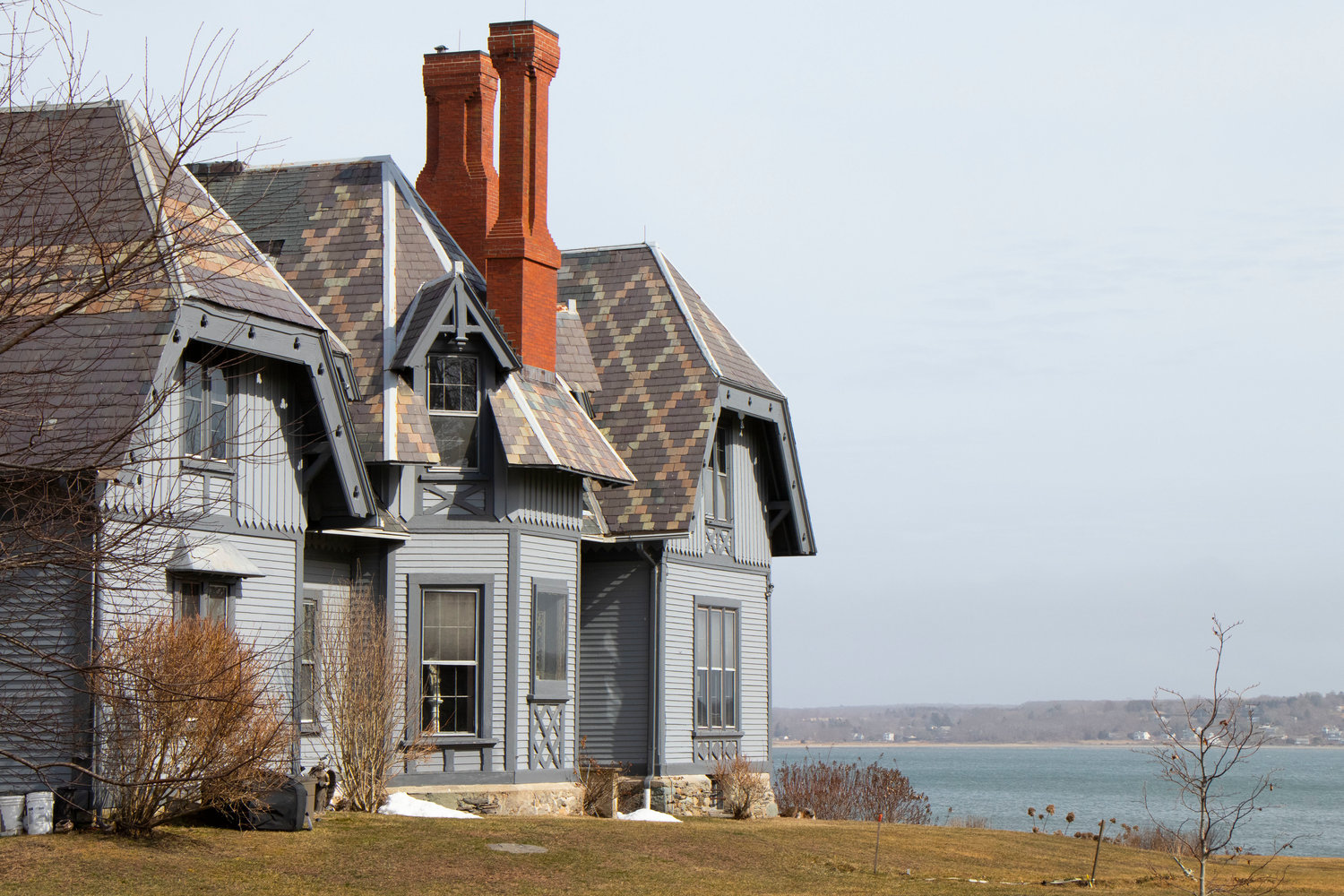 The Wilsons’ home has an expansive view of the Sakonnet River. The property is listed on the National Register of Historic Places. David Chase, former deputy director of the Rhode Island Historical Preservation Commission, described the house as “an important example of mid-19th-century Gothicism ... that deserves commendation as a fine design.” 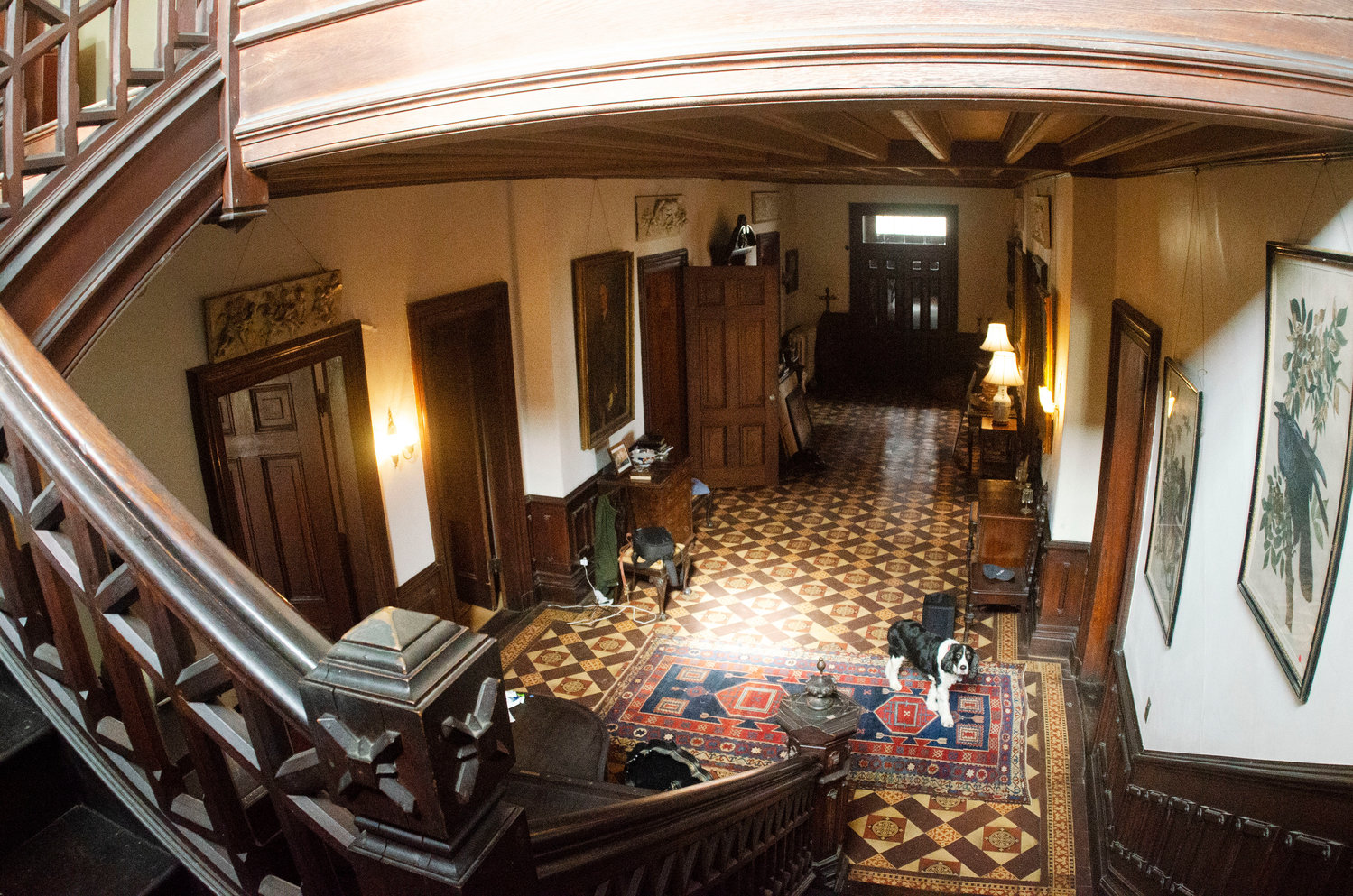 Nancy and Bill Wilson’s Springer Spaniel, Maggie, takes a stroll through the first floor hallway that leads from the main entrance of the house to the stairway. John Hubbard Sturgis, the architect hired by John Barstow in 1864, arranged for the Minton tiles to be imported from England in the early stages of the project. 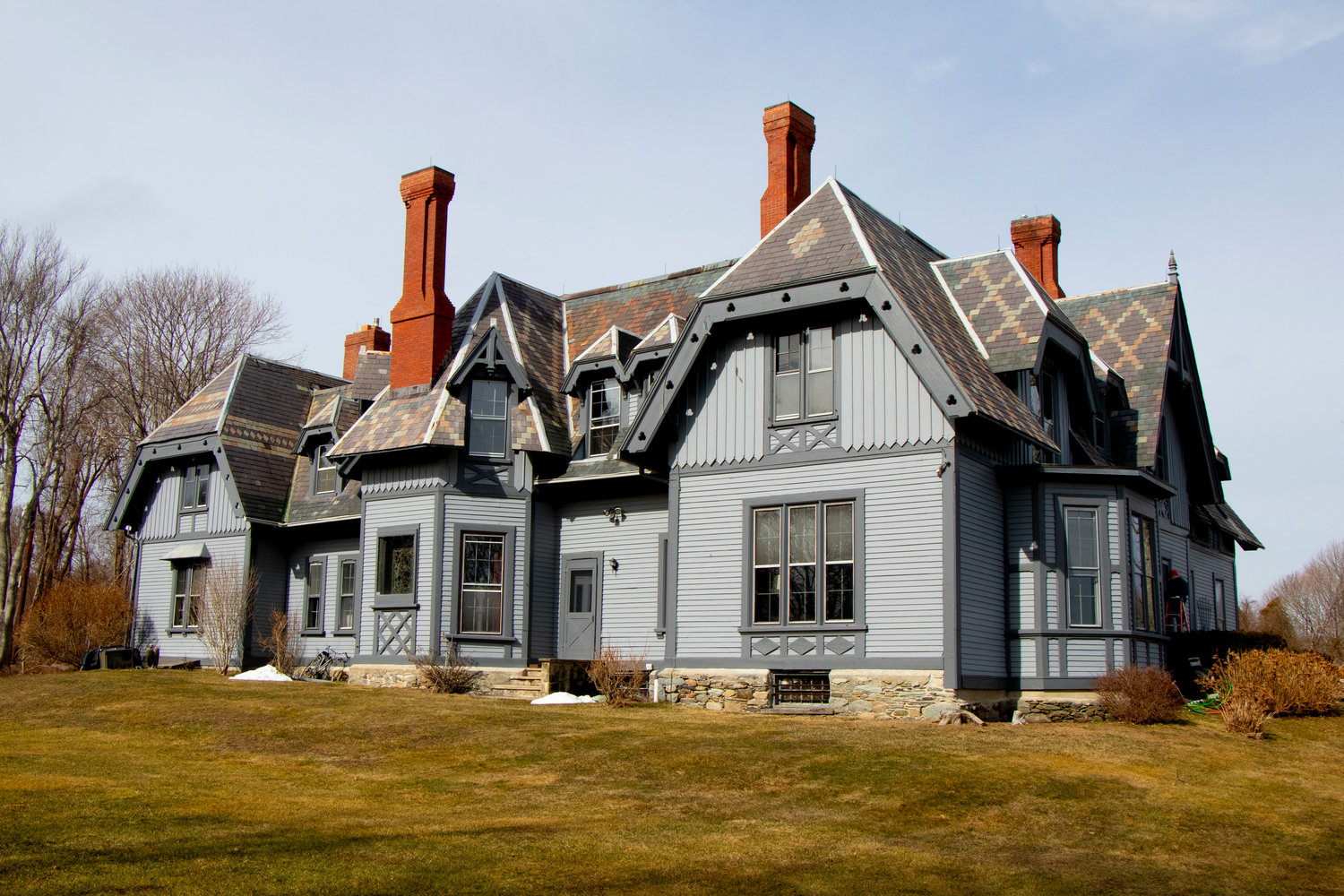 The owners of Greenvale Vineyards live in — and are renovating — a Gothic-style home built more than 150 years ago that is on the National Register of Historic Places. Its 12,000 square feet and 20 rooms enjoy a high perch overlooking the Sakonnet River.
Previous Next
Posted Thursday, April 21, 2022 6:00 pm
By Ruth Rasmussen

When Charlotte Condit Parker arrived at Portsmouth’s Greenvale Farm in 1918, she found the once-proud homestead that had been built by her uncle more than a half century earlier in ruins. Unoccupied for 20 years and the frequent target of vandals, it was referred to by locals as a “castle for vagrants.”

Charlotte and her husband, James Parker, were in their early sixties at the time. He was a retired major general who had received numerous awards for distinguished military service. The couple could easily have walked away from the dilapidated homestead and the 53 acres of neglected farmland to focus instead on creating a tranquil but unremarkable new chapter in their lives.

Instead, they bought out other family members who still held a financial interest in the property and set about honoring the original owner’s legacy by making Greenvale a working farm once again. The couple made virtually no changes to the building, other than remove a wraparound porch that covered three sides of the structure and made the interior rooms too dark.

This is one of several stories the Parkers’ great-granddaughter, Nancy Parker Wilson, and her husband Bill Wilson, Sr. relayed to visitors during a recent tour of their home, which they are restoring, and their land, on which they operate Greenvale Vineyards, their sixth-generation family farm that currently produces signature wines and is a major draw for visitors from throughout New England and beyond.

The origins of the wine business date back to 1993, when Nancy’s parents, Cortlandt Parker and Nancy Knowles Parker, lived in the house and were trying to figure out what the future would hold for the farm.

“Our first major project,” Bill said, was making a licensed winery in the basement. And that allowed us to legally sell wine – we just made a couple of barrels of wine down there, but all the wine we’ve made since then is off-site.” That will change this year, he said, as construction is now underway for a structure that will allow wine production on the property.

The Greenvale tour begins in the Gothic-style home built in 1866 by Nancy’s great-great-uncle, John Sargent Barstow. He had been a successful Boston merchant engaged in trade with China and was able, as he approached middle age, to retire so he could pursue a life as a “gentleman farmer.” He also wanted to provide a home for his mother and some of his 12 grown siblings.

“It was a family home,” Bill said, “built in his mother’s honor. Here is a guy who spent his life overseas; so now he wanted to spend as much time with his family as he could.”

Barstow was captivated by author and landscape architect Robert Morris Copeland, author of “The Country Life – a Handbook of Agriculture, Horticulture and Landscape Gardening,” published originally in 1859. An early edition owned by Barstow is more than 800 pages long, with chapters describing in precise detail best farming practices, while encouraging readers to create a “country place that may gratify all the tastes of a lover of country life.”

The book, Nancy says, was central to everything that Barstow created.

“As a single man with significant assets, he could have purchased hundreds of acres, she said. “And then, he’d have lots of people managing it, but he wanted to manage it himself.” This was a mindset very much endorsed by Copeland, who dedicated his book to those engaged in “cultivating and adorning the earth.” Such a calling, he said, would “expand the mind and enoble the soul.”

Shortly after purchasing the land, Barstow hired the prominent Boston architect, John Hubbard Sturgis, to design the main house, stable, and barn, and he selected Edmond Coggeshall of Portsmouth as his builder. Sturgis trained in London, Bill said, and brought an English influence to his design, whereas many young American architects who trained overseas were schooled at the L’Ecole de Beaux Artes – the French National School of Architecture.

Bill said Sturgis had excellent connections with tradesmen in England, and he would ask them to ship products that would work for the house. The distinctive geometric Minton tiles, for example, that cover the long central hallway on the main floor, are original to the house and were shipped direct from the factory. The diagonal pattern on the tiles is incorporated into the company logo and replicated on the wine bottle labels.

The diagonal pattern is repeated both inside and out – on the colorful roof and on exterior trim below all the windows. It can also be found on original wallpaper on the second level.

The wallpaper, Bill says, had originally been hung on both the first and second floors. “You’d come up to the house,” he said,” and in addition to the diagonal pattern on the roof, you’d come inside and see the pattern on the walls, and on the tile floor.

The design of the house has been described in various publications as “winsome,”

“picturesque,” and “exuberant.” Bill, an architect who specializes in university buildings, has called it “energetic.”

The building is 12,000 square feet, with about 20 rooms, yet it is anything but ostentatious.

“The theme behind Country Life is that you live in a simple house,” said Nancy. “It is not meant to be fancy at all. When you approach the house, I think it looks like a large farmhouse – it has some size but is not too intricate, until you look harder, and then you see there are different patterns for the main house – a diamond roof pattern, and the service wing – with a striped roof pattern. But you are not necessarily overwhelmed by it. It is not meant to be showy.”

“And then,” she continued, “you take a minute and you walk around it and you get to the back of it, and that’s where the architect had a moment to be able to really create a dynamic elevation.”