Three representatives of the state agency appear before the harbor commission

Three representatives of the state agency appear before the harbor commission 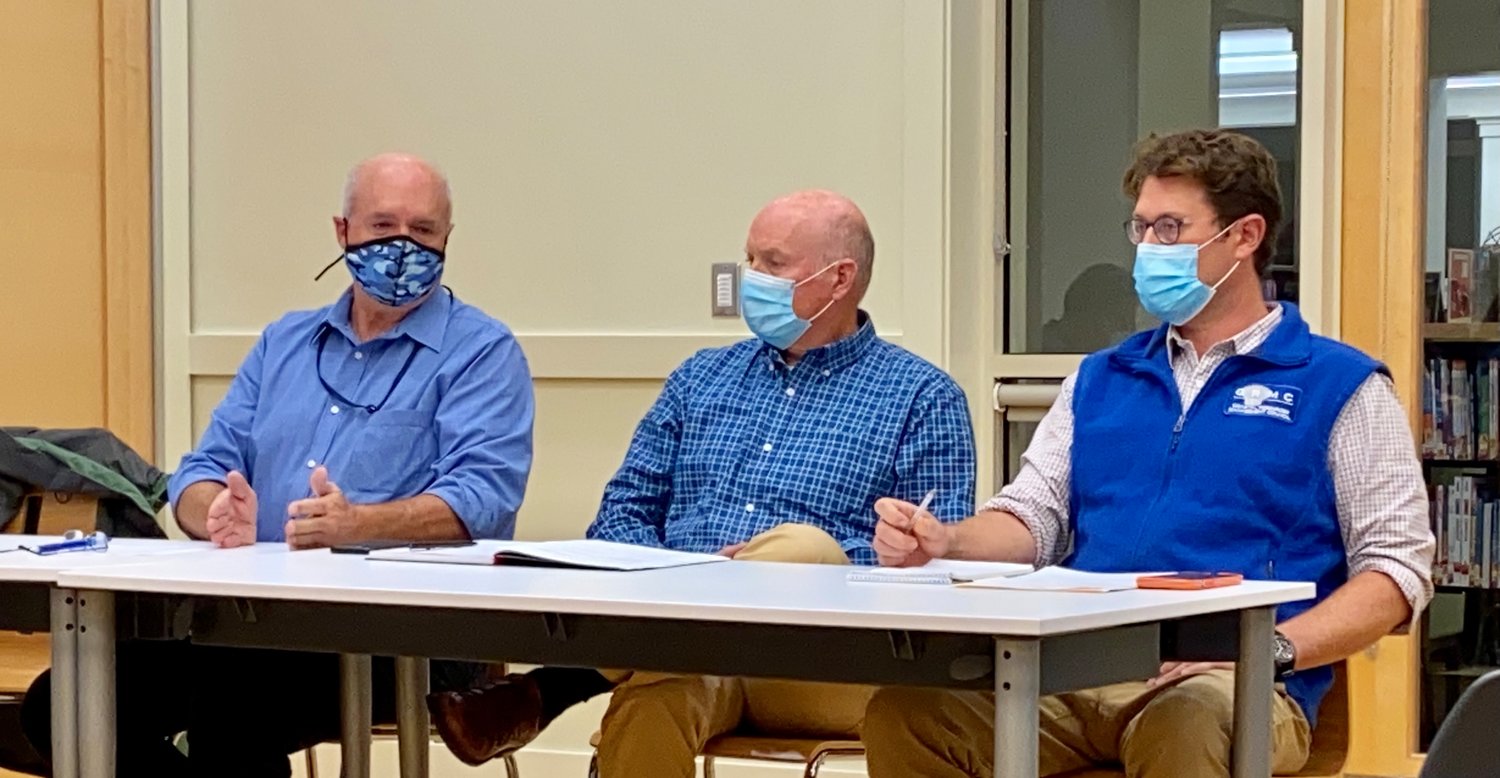 Is aquaculture consistent with the public trust? There is legislation that says that in this state. The position of the CRMC is we support aquaculture where it can be accommodated.”
Benjami Goetsch, CRMC aquaculture specialist

I'm concerned that what's being held in the public trust is being given away. That bothers me.”
Tiverton Town Council member Donna Cook
By Ted Hayes

Representatives from the state's Coastal Resources Management Council got an earful Monday evening when they appeared before the Tiverton Harbor Commission to talk about the changing face of aquaculture in Rhode Island.

Though CRMC executive director Jeffrey Willis said from the outset that neither he nor his two colleagues  would talk about specific aquaculture proposals before the agency, many in the 30-strong audience at the Tiverton Public Library had plenty to say about two oyster farm proposals currently being considered by the agency.

Both plans — a one-acre farm just south of the Seapowet Bridge and a larger proposal to the north — are currently before the CRMC, and while each has its proponents, each has also drawn strong opposition from residents along Seapowet Avenue and elsewhere in town.

Residents, town officials and some commission members who spoke said that apart from their opposition to both plans from a public access and land use point of view, CRMC has done a poor job bringing the public into the process. And they said the lack of "proper" notification to abutters and other stakeholders has led to misinformation, confusion and a feeling by some residents that they don't have a say, nor an advocate, at the agency.

"We have to decide whether you're the regulator or you're the promoter" of aquaculture projects, said audience member Tom Ramotowski, the chairman of the Tiverton Conservation Commission. "In a lot of people's minds here, they conflict, and in my mind as well."

"I'm concerned that what's being held in the public trust is being given away," added Tiverton Town Council member Donna Cook. "That bothers me."

CRMC officials reached out to Tiverton and asked to speak before the harbor commision to give an overview of how the agency works, and how it regulates oyster farms and proposed oyster projects. Willis said that since the first oyster farms started appearing in the South County area in the 1970s, the industry has grown steadily up and down Narragansett Bay. There are currently 83 operating oyster farms in the state, and that growth and expected future growth needs presents the agency with challenges, he said. That is why the agency is working to revamp and update its policies and SAMPs (Special Area Management Plans).

Several residents said that apart from giving more consideration to the needs of those who live adjacent to and recreate in public waters, one of the most important things the agency can do is work harder to bring all stakeholders into the process, from those who live close to proposed farms, to recreational boaters, shellfishermen and other affected recreational users. They complained that under current CRMC policy, those directly impacted are not directly notified when a proposal comes before the agency. Though the CRMC just started an e-mail listserve for people interested in aquaculture projects, it is not enough, some said.

CRMC deputy director James Boyd said the agency is doing the best it can but can certainly do more. However, he said, the devil is in the details and when one talks about an offshore project, it is difficult to define who is an abutter, and who is not:

"We definitely understand and hear loud and clear that the notification process" needs examination. "We're trying to figure out the best way to get that notification out. It's not so easy when the project is out in the water. People (property owners) might have a direct visual of the site but they may be a quarter or a half mile away."

Though the discussion was about policy, not individual projects, residents and board members had much to say about their thoughts on aquaculture here, and what they would like to see changed.

Commission member Charles "Chip" Lawrence said he would like to see regulations that would prohibit any aquaculture operation less than 1,000 yards from any "recreational" area, much as he said Suffolk County, NY already requires. He also believes all farms should be at least 1,000 feet away from any mooring field.

Fellow commission member Clint Clemens said buffers around recreational areas make sense, as "not everyone understands how to navigate around the maze of an oyster farm."

As for ways to better alert the public when an application is submitted to CRMC, Clemens said "there's a gap between public information and the public being informed."

That needn't be, he suggested, as "notification could actually happen quite simply. Put the onus on the applicant to send certified letters to all whose property lines cross" the proposed aquaculture operation.

Ramotowski agreed, and said notification could also be done the way it is handled in more traditional land-based zoning and planning projects.

Suggesting that letters be sent to recognized abutters, he also favors legal advertisements and announcements hung at town hall.

"Notification needs to be much broader. Because there are a lot of people that use this space that don't live anywhere near there. Thee's a lot of work to be done by your commission to make sure people know what's going on."

Several residents said they worry that CRMC has become a de facto arm of the aquaculture industry, favoring farmers over recreational users and traditional public access rights. But in some of his final remarks, CRMC aquaculture specialist Goetsch disagreed.

"Is aquaculture consistent with the public trust? There is legislation that says that in this state. The position of the CRMC is we support aquaculture where it can be accommodated. "

"We're not giving it away. The process ... is designed to determine where things can be accommodated."

Food prices are rising, and so are trips to local food banks