As the sun set on a beautiful summer night, a handful of local volunteers spent one recent evening scraping away at some of Little Compton’s oldest tombstones. As they worked, years of lichen, … 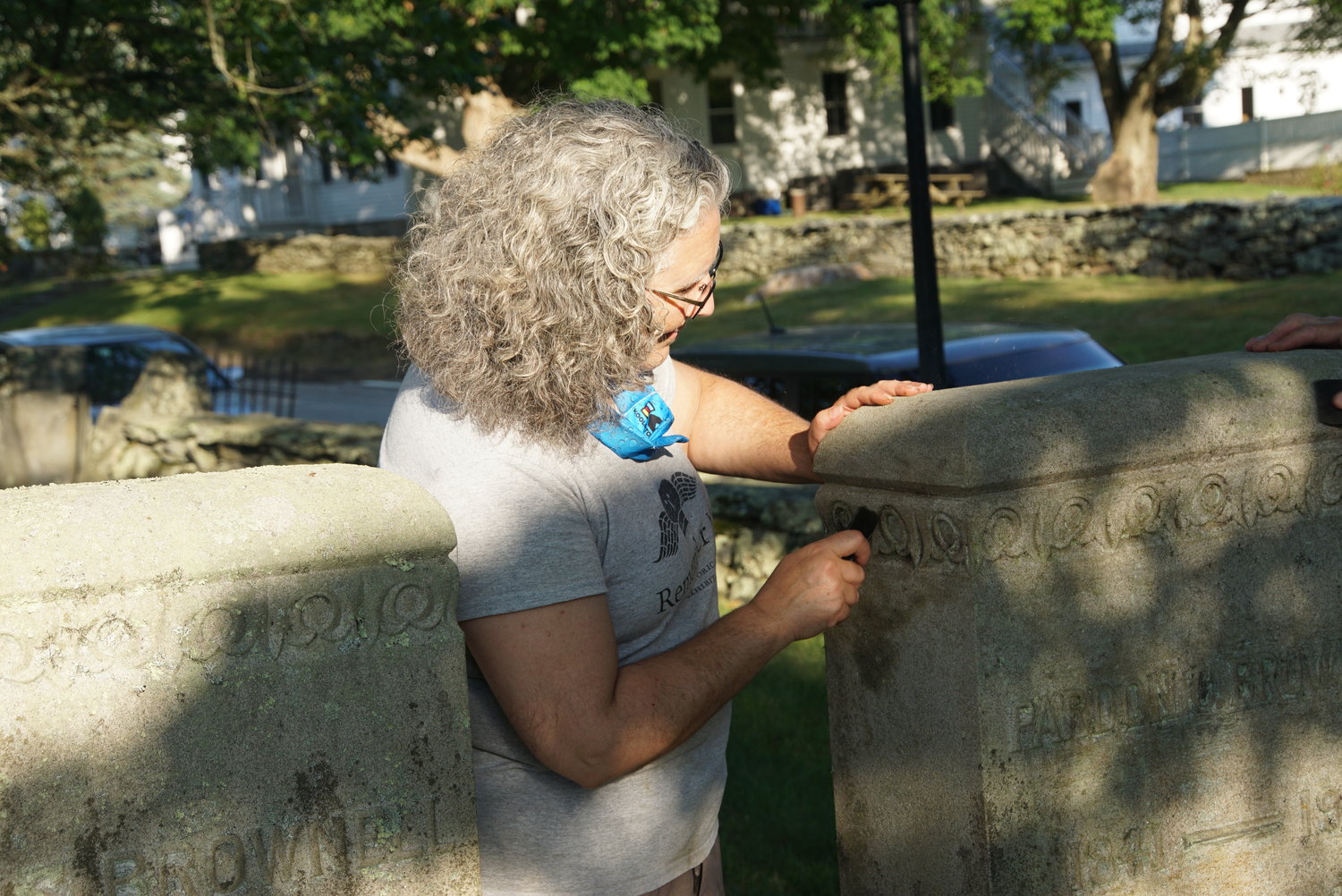 As the sun set on a beautiful summer night, a handful of local volunteers spent one recent evening scraping away at some of Little Compton’s oldest tombstones. As they worked, years of lichen, mold, dirt and debris fell away, revealing intricate stone carvings — elaborate text, death's heads and other iconography — beneath.

The workshop on proper gravestone cleaning was held at the Old Burying Ground at the Town Commons and was led by Marjory O’Toole, the executive director for the Little Compton Historical Society. Another is planned for later this month (see end of story).

O’Toole was born and raised in Little Compton, and returned to the town after moving away for a few years. Growing up on her paternal grandparents’ farm here, she developed a great sense of community and the need for preservation of local historic sites, and she now lives on a piece of what once was her maternal grandparents’ property.

“I find our local cemeteries to be some of the most engaging historic spaces in Little Compton,” she said. “The histories one can find there are compelling, both of the stones themselves and of the individual they honor.”

O’Toole has been with the Historical Society for 16 years and all of her research, cleaning, and repair work with gravestones has been under the instruction of Historical Society board member Fred Bridge, who has been caring for Little Compton’s historical cemeteries for more than 20 years. Bridge, along with his wife Helen, was recently acknowledged for his work and presented with an Oakley Award of Merit from the Association for Gravestone Studies.

“Personally, I really like learning about the people for whom the stones were made,” said O’Toole. “I’ve learned about young children dying in epidemics, elders living beyond their 100th birthday, formerly enslaved people building middle-class lives for themselves, and slave traders dying off the coast of Africa. It has been fascinating.”

In 2018, the historical society dedicated all of its efforts to a historic cemetery project called “Remember Me.” Members recruited and trained 100 volunteers to clean 1,000 gravestones, working with gravestone preservationists Betty and Carol Mencucci to learn how to restore broken or toppled stones.

“The historical society would like to keep Little Compton’s historical gravestones as well-preserved and as legible as possible for as long as possible,” said O’Toole. “Some are over 300 years old. With care, some will last another 300 years. We are trying to keep these stones in good shape for hundreds of years to come.”

With a total of 46 historic cemeteries in the town, the group’s goal is to finish cleaning the stones at the Old Burying Ground and eventually move to other cemeteries in Little Compton where stones need cleaning.

“It’s very rewarding because you kind of get to reflect on the person who’s buried there,” said Terry Ryan, a first-time volunteer. “We read each and every single one as we go.”

Many easily available cleaning methods like household cleaners, bleach, and powerwashing can be harmful to historic stones and could cause damage to the grave, and that is why O’Toole encourages anyone interested in cleaning gravestones to contact the society and receive the proper training before cleaning stones on their own. All volunteers are provided with all of the materials needed, including the D2 biological solution which is the only cleaner that is safe to use on gravestones.

“Unless someone is trained, they shouldn’t clean historic gravestones, because they could actually be doing further damage,” said O’Toole. “It is not a good idea to try to repair gravestones on your own, but with a little training, you can learn safe techniques, and we would love to have more help moving forward. It is a huge job and requires lots of hands.”

Note: For those interested in volunteering, another session will be held Wednesday, August 24, from 4 to 7 pm, with a pizza break at 6 pm. The event is free and open to all.