$1.325 million study of Gooseberry causeway seeks to determine whether it is reshaping coast from Little Compton to Dartmouth

More times than he can remember, Mark Rasmussen has been asked if he thinks the causeway connecting Gooseberry Island to the mainland is responsible for the many changes this stretch of coast has …

$1.325 million study of Gooseberry causeway seeks to determine whether it is reshaping coast from Little Compton to Dartmouth 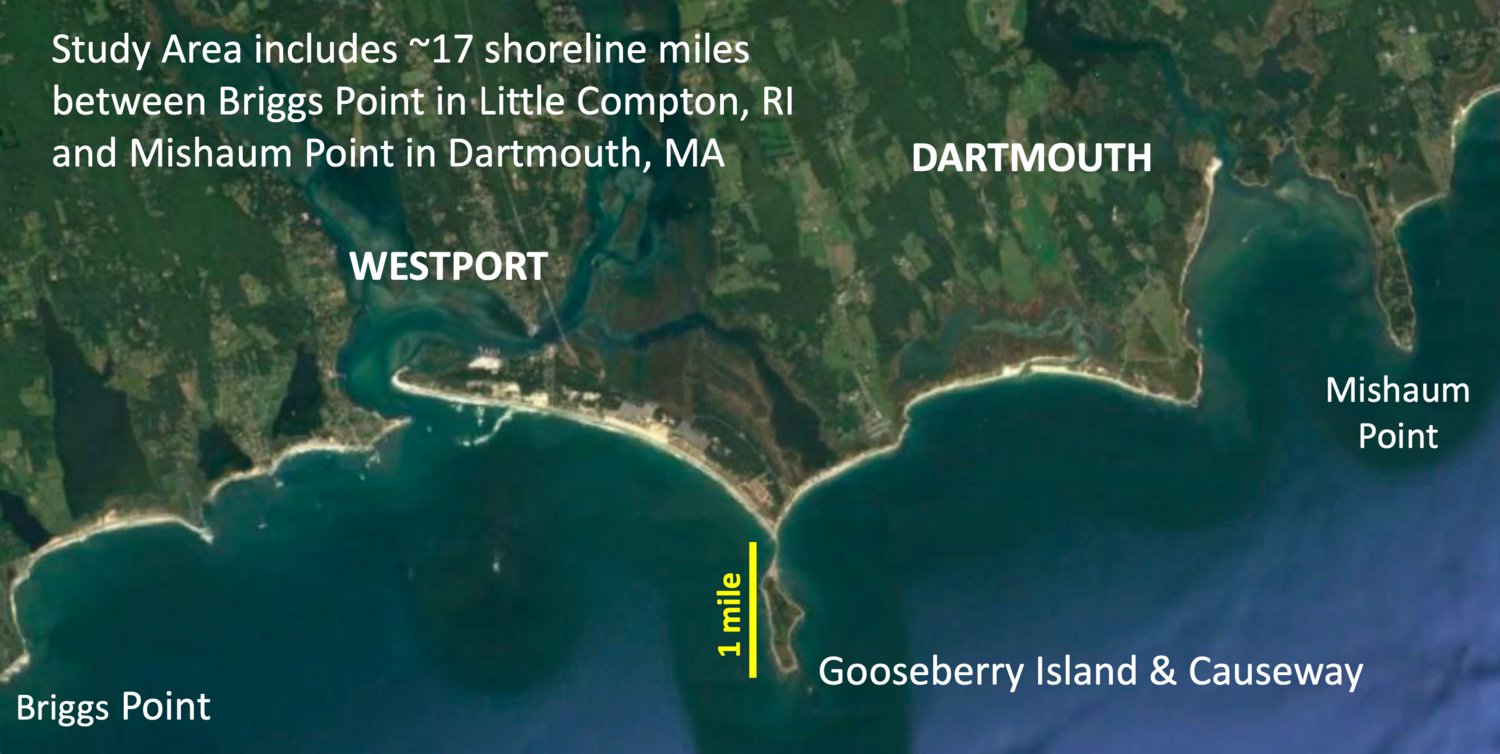 More times than he can remember, Mark Rasmussen has been asked if he thinks the causeway connecting Gooseberry Island to the mainland is responsible for the many changes this stretch of coast has seen in recent decades. He's never been able to give a definitive answer, but one might be coming.

A charitable foundation has pledged $1 million to help fund an intensive, three-year study into the causeway and the effect it is having on the coastline from Little Compton to Dartmouth. The study is expected to cost $1.325 million, will use advanced computer modeling, extensive wave, current, salinity and core sample testing, and other data to attempt to answer the extraordinarily complex question.

"This has always been one of the big outstanding questions on Buzzards Bay," said Rasmussen, the president of the Buzzards Bay Coalition. "It's always been too scientifically complicated to settle and it's very frustrating to never have an answer."

But it's a big one. In forming the Westport's new resilience committee, town officials said determining the causeway's impact on the coast is of vital importance as sea levels rise, and Westport and other communities attempt to lay out a long-term plan for stewarding their coasts.

"It's about much more than Gooseberry" Island, Rasmussen said.

For years, the coalition and other groups have been looking for funds to commission a large scale study of the causeway, which was built as the United States Army Corps of Engineers established a coastal fortification on the island in 1943. It replaced a smaller causeway built in 1922 and destroyed in the Hurricane of 1938.

Though the state has done some small studies in the area over the years, Rasmussen and others have long felt that a more detailed look is crucial.

"The hurdle was never lack of availability to do the science," he said. "It was just the huge cost. In order to answer it, it needed to be a deep investment."

Last summer, Rasmussen and others from the coalition began talks with the Rathmann Family Foundation, which funds environmental and other projects. Jim Rathmann, a summer Westport resident, listened and study proponents were encouraged to present a full proposal.

Coalition staff quickly got to work laying out a broad plan. By the fall, they had contacted and gotten agreements to participate from scientists at Boston University's Department of Earth and Environment, the Woods Hole Group, the Virginia Institute of Marine Science and the United States Geological Survey — Woods Hole Coastal and Marine Science Center.

With a team in place, project proponents went back to the foundation and learned in January that they had been approved for a $1 million grant. The rest will be raised through fund-raising efforts, which are now getting underway.

Rasmussen said that in order to understand what's happening at Gooseberry, one must zoom out and look at the 17-mile stretch of coast from Briggs Point in Little Compton at the west, all the way to the Slocum River in Dartmouth at the east.

Up and down this stretch of coast, there are troubling trends that may or may not be a result of the causeway, and right now scientists don't know whether the island and causeway, known collectively as a 'groin' — are to blame.

* Researchers want to know if the causeway creates back currents that limit the Westport River estuary's ability to exchange clean offshore water at each tide. To that point, they want to know: Could removing or altering it restore natural flushing to the river and thereby result in better water quality?

* Another focus is East Beach, which has lost nearly 200 feet of land since the causeway was built. The question has always been, 'Where did all that sand go? And is the causeway responsible?' Similar questions involve the cobbling that is taking place along this stretch of coast, leading some to give Horseneck Beach a new nickname — Horseknuckle Beach.

* Further east, the Barney's Joy inlet at Allen's Pond has been increasingly unstable in recent years. In the past, the inlet would close once every five to seven years. Now, it closes every three to four. Is this instability linked to Gooseberry-altered sediment flow?

* At the eastern edge of the study, the mouth of the Slocum River has seen dramatic shoaling in recent years, with new sand filling in around the river outlet and restricting flushing to the nitrogen-impaired estuary. Is sand stripped and washed from East Beach transported more than five miles downshore? And how much has this new sand contributed to water quality and fisheries declines in the estuary? Could removing it improve the river's health?

* Models predict that sea level rise will increase 1.27 feet over 2008 levels by 2030, 2.57 feet by 2050, and will accelerate to nearly eight feet by 2100. What is the causeway's entire effect on the lower Buzzards Bay coast, when coupled with the effects of climate change-drive seal level rise?

The study will rely on state-of-the-art computer modeling and old-fashioned data collection. As the work gets underway, researchers will tackle the question from multiple fronts.

They will install wave moorings to collect data on wave heights, currents and other data points. Currently, researchers are considering installing three — one off Horseneck, one at Barney's Joy, and one more offshore at Hens and Chickens reef.

Along the width of the study area, GPS systems will measure water levels and depth with accuracy good to the centimeter.

Other data will include photographic analysis of past and current conditions, small boat surveys and other means.

Data collection is expected to take a year and a half.

Once researchers have collected enough and can plug it into computer models, they will be able to run simulations that should estimate what the coast would look like if the causeway had never been built, what it could look like if it was removed or altered, how infilling over time has affected water quality in the study area, how sea level rise could affect the study area, and more.

Rasmussen said there is no pre-determined outcome, and that "it's entirely possible that the causeway is a small impact and that over the course of a 17-mile shoreline, it's not a problem."

Still, the questions and suspicions are significant enough that an involved study was a key recommendation included in the MVP-funded East Beach Corridor Vulnerability Study, which led earlier this year to the formation of the town's new resilience committee.

Mike Sullivan, a committee member who lives near Gooseberry, said he and his fellow resilience members are grateful to the Rathmann Foundation, coalition ad its partners for taking on the massive project.

"After many years of discussion, it is wonderful to see a number of efforts get underway to better understand the effects of the causeway on our shoreline," he said.

During his regular visits to the shore, "it is clear that East Beach had been accreting or growing during the 90 years prior to the installation of the causeway. Then, in the 60 years that followed, East Beach erosion began and the beach marched in over 100 feet."

What will be done with the data and models, Rasmussen is up to the various stakeholders, including the towns along the study area, as well as state and federal government, Rasmussen said.

And he believes that the time is right for such a study. New state and federal funding directed at climate change adaptation is coming, and favors those who are prepared, he said:

"Without a major investment in the science, local communities and the commonwealth will never have the evidence to make the case for change," he said. "The projects with the science and the plans ready will be the ones that move."