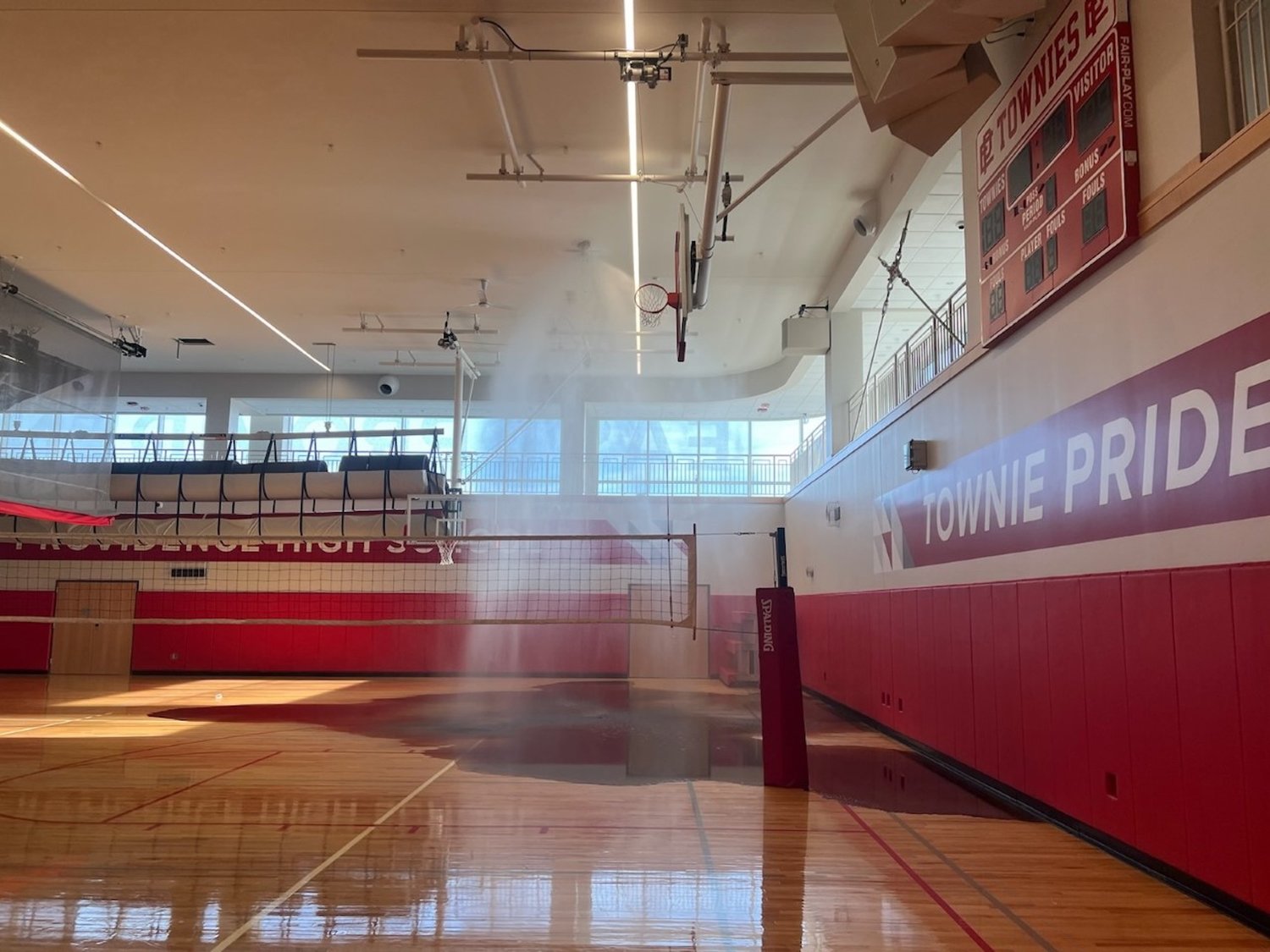 The sprinkler inside the EPHS gym is activated just after an errant strike by a student playing volleyball during a physical education class.
Photo courtesy EPSD Facilities Director Chris Murphy 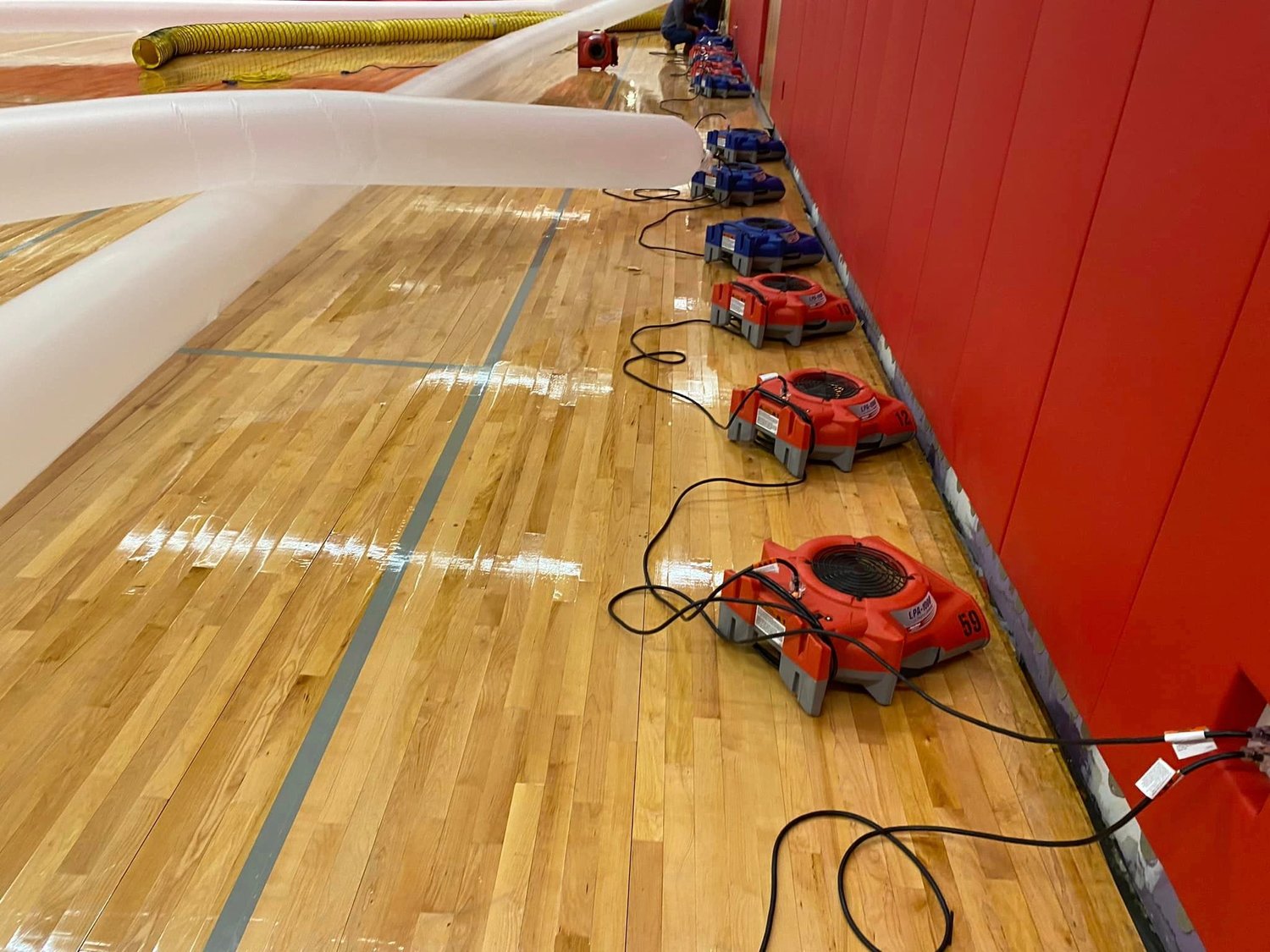 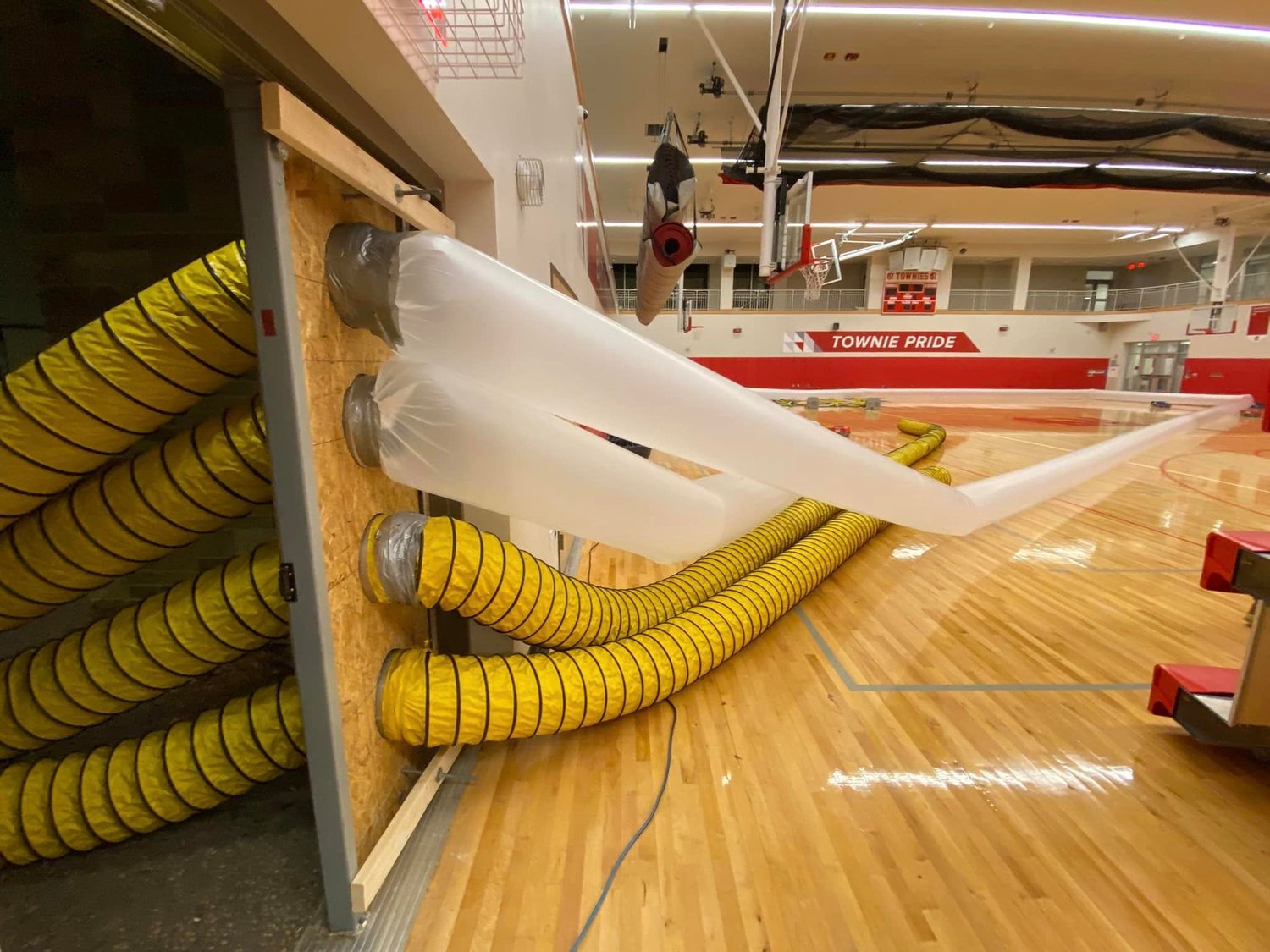 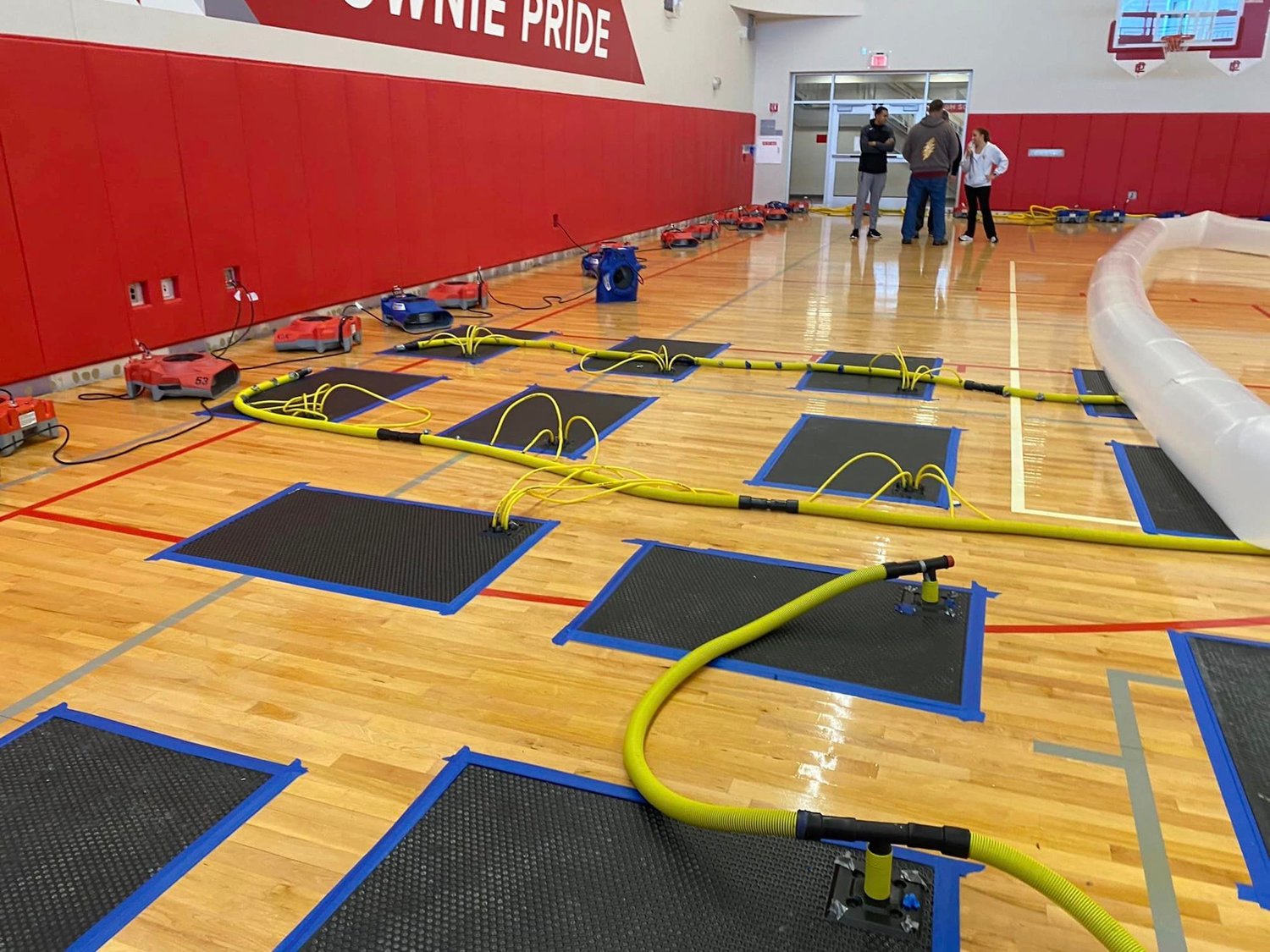 EAST PROVIDENCE — An errant volleyball smash caused the accidental engagement of the fire suppression, sprinkler system as East Providence High School’s Ramos Gymnasium the week before Christmas, but the quick work of district staff and an outside vendor precluded any significant damage to the 16-month-old facility.

At the January 2023 meeting of the School Committee, the first of the session for members seated after the November 2022 election, Superintendent Dr. Sandra Forand provided the body and the community writ large with an update on the situation.

Forand, as part of her monthly report, explained a hit by a student during a physical education class game of volleyball on Wednesday, Dec. 21, went awry, ricocheting off a basketball backboard and hitting a sprinkler.

The strike broke the “bulb” inside the head, immediately sending a burst of suppressing water into the air. All told, the superintendent said it is estimated some “500-600 gallons of water was discharged.”

Forand noted district facilities department personnel based at EPHS along with others in the division supervised by director Chris Murphy sprinted into action. As well, within 90 minutes Clean Care New England, based in Warwick, was on the scene to lead the response and recovery.

The superintendent said “up to 300 gallons” of water was vacuumed by district and Clean Care crews, which brought its mobile drying trailer, nicknamed “The Beast,” to the EPHS campus.

She continued, Clean Care later laid down several moisture pads, a hot air tube and ran some 80 fans to aid in the evaporation process.

“I’m happy to report we have very minimal damage,” Forand added. “Right now, we have a little cupping on the floor, which in speaking with the representatives from the floor company and Clean Care they feel that will over time return to a flat surface. So they’ve suggested we do not sand the floor and do not make any changes at this time.

“It was handled extremely well and right now we don’t have any permanent damage to the floor.”

After the meeting, Murphy explained Clean Care’s procedures included running a translucent plastic tube to pump heated air into the gym from a large generator located just outside to aid in the evaporation efforts. The director continued, the “extraction mats literally sucked up moisture vapor from the minuscule air spaces between the flooring members.” He added, the tubes connected to the pads then “funneled the moisture to a central collection bin” also located outdoors.

“The gear (Clean Care) brought to bear within a very short time span, accompanied by the immediate insure clean up action of EPHS custodial and maintenance personnel prevented this accident from being far worse than it was,” Murphy said.

There was some early social media speculation in the immediate wake of the accident that there had been a fire in the gym because it appeared parts of the floor looked charred, had taken on a dark coloring.

Of that Murphy added, “The black stuff in the water is a cutting agent that is the residue that remains in the fire suppression pipes after they are cut and installed…(Social media users) thought the dark water was burned wood.”

The accident took place in the secondary portion of the gymnasium, the smaller area where physical education classes take place and is used by athletics teams mostly for practice, not the main court utilized for varsity basketball and volleyball contests.

A girls’ varsity basketball game against North Kingstown scheduled for the following evening was switched to the Skippers’ home court. Because the teams place twice during their Division I campaigns, North Kingstown came to the city last Saturday, Jan. 14, on the date it was originally slated to host the Townies.

A boys’ freshman basketball game against Westerly in the gym set for the actual day of the accident was postposed until January 7. The Townies eventually played and defeated the visiting Bulldogs.

And the practice schedules for the hoops and wrestling programs faced minimal interruptions.

Lighting upgrades
As well in her report on facilities, the superintendent told the committee the replacement of fluorescent lighting with LED (light emitting diode) fixtures at Riverside Middle School is about 40 percent complete and is continuing each day and week.

A similar effort will soon be undertaken at the new administration building/old Career and Tech Center on the EPHS campus.

The bids received by the district for the projects at Orlo Avenue and Silver Spring Elementary Schools have been accepted.

The superintendent said RMS is also set to have its windows replaced but the district was displeased with the bids it received in a previous request for proposal (RFP) and a new RFP is planned to be initiated next month, February 2023

Other projects
Also of note, Forand said the deteriorating smokestacks for the heating systems at the Silver Spring and Hennessey Elementary buildings are set to be replaced.

In addition, Google Chromebook laptops have been provided to custodial staff throughout the district to enhance communication and allow for use of a repair ticketing system.

And one final note, the superintendent said the district’s in-house electrician, Rich Bianco, continues to install the preliminary base wiring to prepare all buildings for the upgraded security and badge systems throughout the district. Forand said the wiring is expected to be completed by the end June.