Nearly one meter down, and Ora Elquist and Andrew Polta could see the history of St. Mark's Church come stubbornly to light.

The archaeologists, who work with Public Archaeology Laboratory (PAL) … 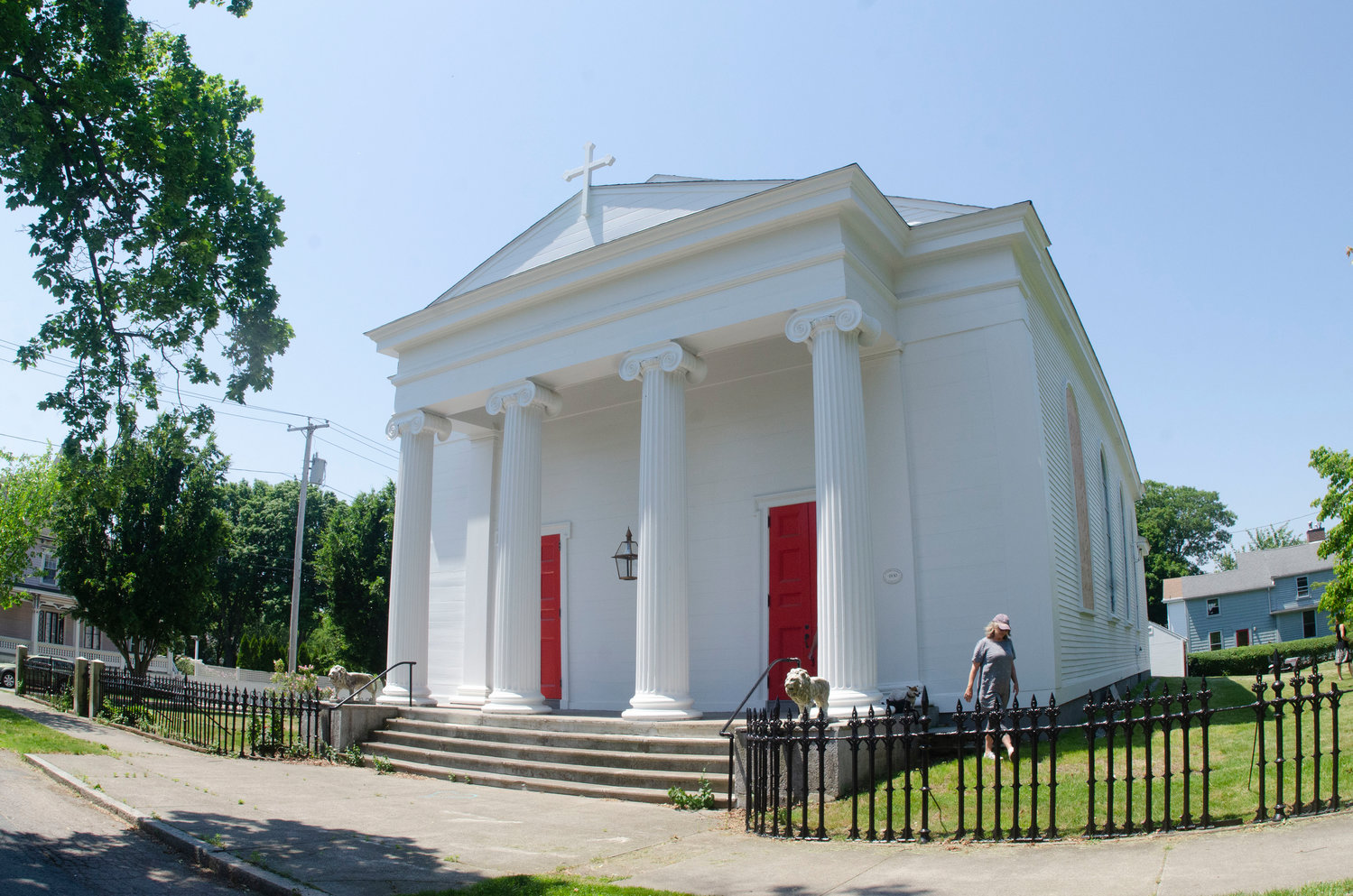 Hadley Arnold walks in front of her home, the old St. Mark's Church on Lyndon Street, to where archaeologists were conducting a dig Monday.
Richard W. Dionne Jr. 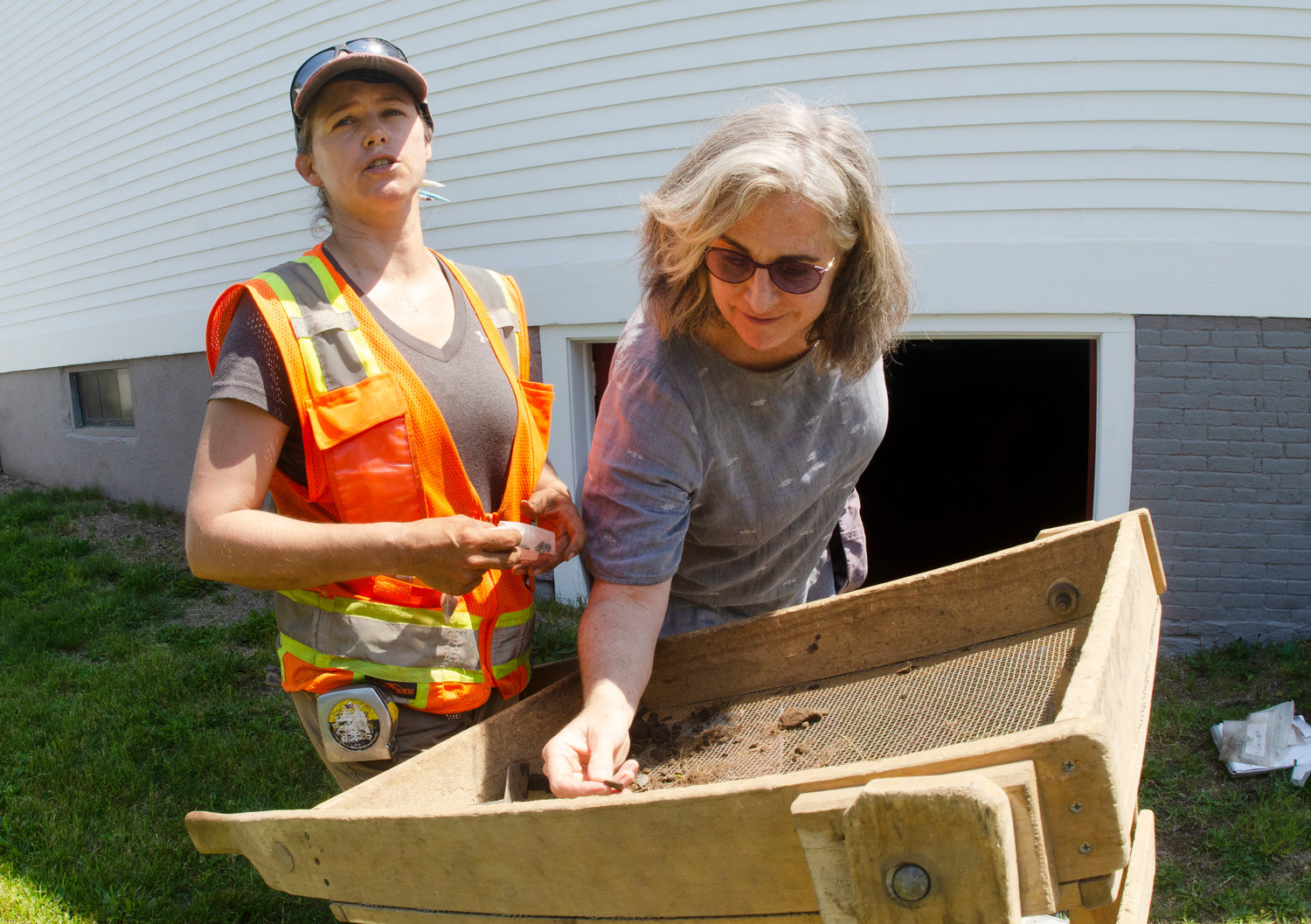 Nearly one meter down, and Ora Elquist and Andrew Polta could see the history of St. Mark's Church come stubbornly to light.

The archaeologists, who work with Public Archaeology Laboratory (PAL) in Pawtucket, were crouching in the side yard of the old church on Lyndon Street, which is now owned by Hadley and Peter Arnold. While Andrew dug out the square pit, Ora took the trailings and ran them through a sifter, looking for artifacts from the 1830 church's early days or before. Small bits and sprinklings of daily life long ago — nails, bits of metal, tiny pieces of pottery , even fragments of Native American arrow points centuries old — popped up as they continued to dig into the afternoon. Ms. Arnold couldn't have looked happier:

"It's an honor to be in the historic district," said Ms. Arnold, who met Peter on an archaeological dig outside of Rome, Italy 30 years ago.

"The (property's) history didn't start in 1830, we all know that. We're not mandated to do this, but we thought we should. We might find nothing, but we'll satisfy our curiosity, at least just to get a feel for who was here before us."

The Arnolds have big plans for the old church, which they plan to eventually turn into their primary residence. They purchased the property seven years ago this August, and though work on refitting the church to their needs has taken longer than she expected, Ms. Arnold said it will be worth it when that day comes.

Ms. Arnold grew up in Barrington, moving years ago to the west coast. While she and her husband now live in Los Angeles, "this is our real home."

Buying the church happened almost on a lark. For years, Ms. Arnold had been having conversations with her mom about moving back to Rhode Island. During a visit in 2014, she saw a listing for a property in Warren.

Mom undeterred, they went down, Ms. Arnold had a look and fell in love. It was a Tuesday, with sealed bids due that Friday, so she quickly called Peter on the phone and told him about the place.

They put together a bid and the rest is Warren's history.

The intervening years have been spent slowly working on the church. The Arnolds were able to find a new home for St. Mark's pipe organ, and began carefully disassembling the pews so the wood could be re-purposed around the property. They did other work to shore up the structure, painted it and while Ms. Arnold believes they have a ways to go before it's ready, it's a labor of love she does not mind.

"We vacillate between (it being) our white whale and Noah's Ark."

The stained glass windows will be going, and more light-diffuse replacements will replace them. When they are done, Ms. Arnold said the church building will be as self-sufficiently green as possible. It will be filled with open space that would be familiar to those who love studio living, a small kitchen big enough nevertheless for "a nice dinner party for 80," some bedrooms and a long entryway on the south side — "not one bit of drywall is going in here!"

Out in the yard, there could be public art installations.

To complete their work, they hope to rely on their Warren friends and neighbors skilled in the trades needed to transform the property. Luckily, Ms. Arnold said Warren is a "treasure trove" of talent, from carpenters to artists, painters and designers. And it's a wonderful and true community full of good people, she said.

"We want to keep everything (as local) as possible" as the church evolves, she said. "We always thought it would be an amazing family project."

The archaeological survey was precipitated by the Arnolds' plans to cover the dirt basement floor with a concrete slab, and to possibly do some landscaping work in the yard.

A few neighbors and friends stopped by to watch Monday as the PAL archaeologists got their work done. Warren historian Barbara Hail, Lyndon Street neighbor Dory Skemp, Thierry Gentis, curator of the Haffenreffer Museum of Anthropology, and others looked on, telling stories about the church, surrounding buildings and Warren's architectural history as the day passed.

"Having half a dozen archaeologists, curators and historians stop by in the shade of the dogwood over the course of a hot day might just be my idea of heaven," Ms. Arnold said.