When the 2019-20 Barrington Middle School girls’ basketball season began, head coach Mike Topazio hinted that maybe this was going to be a team to be reckoned with as the year rolled … 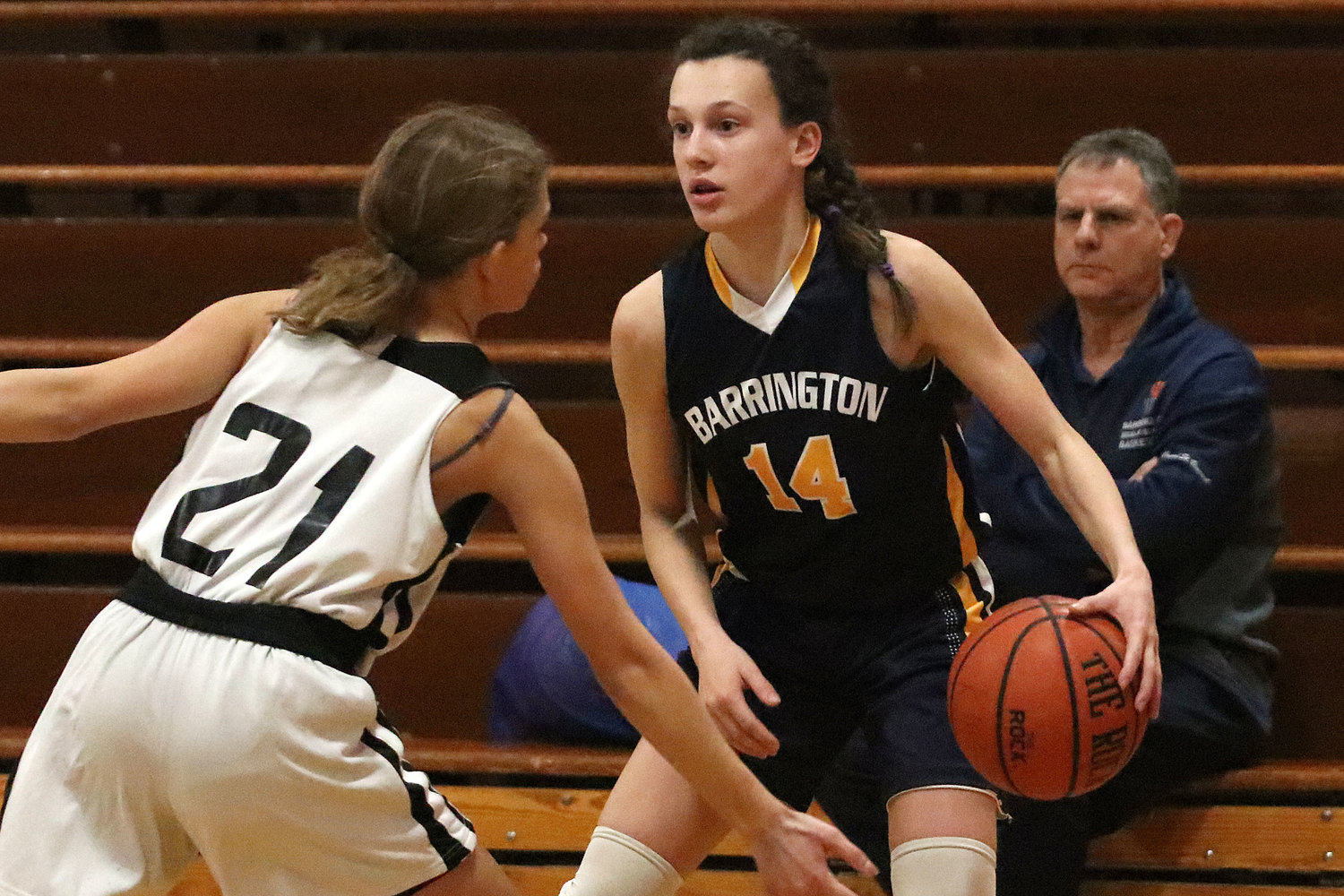 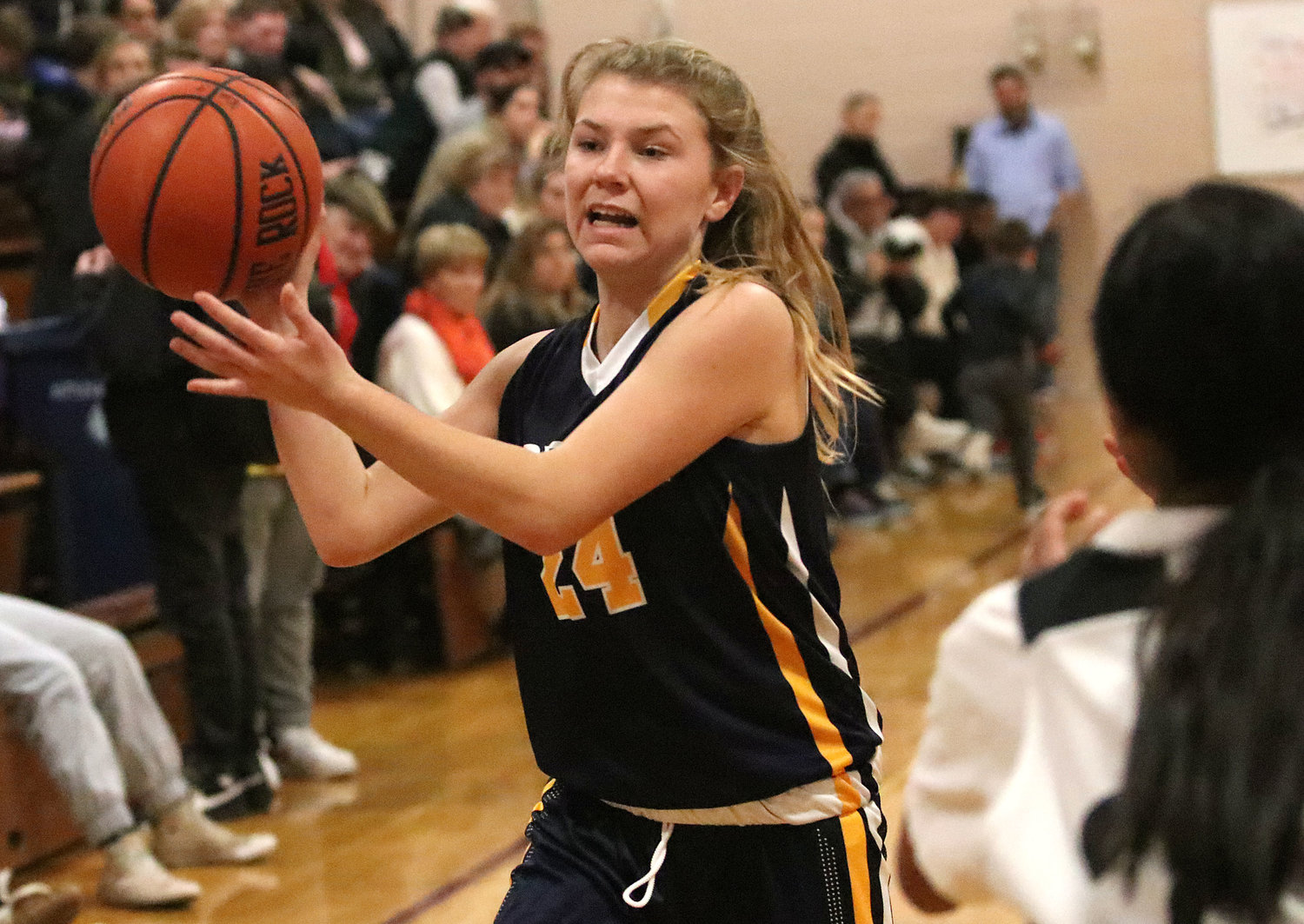 Fran Johnson passes the ball to a teammate during a game against KMS.
Photo by Richard W. Dionne Jr. Players reach for a loose ball during a game between Barrington and Kickemuit.
Photo by Richard W. Dionne Jr. 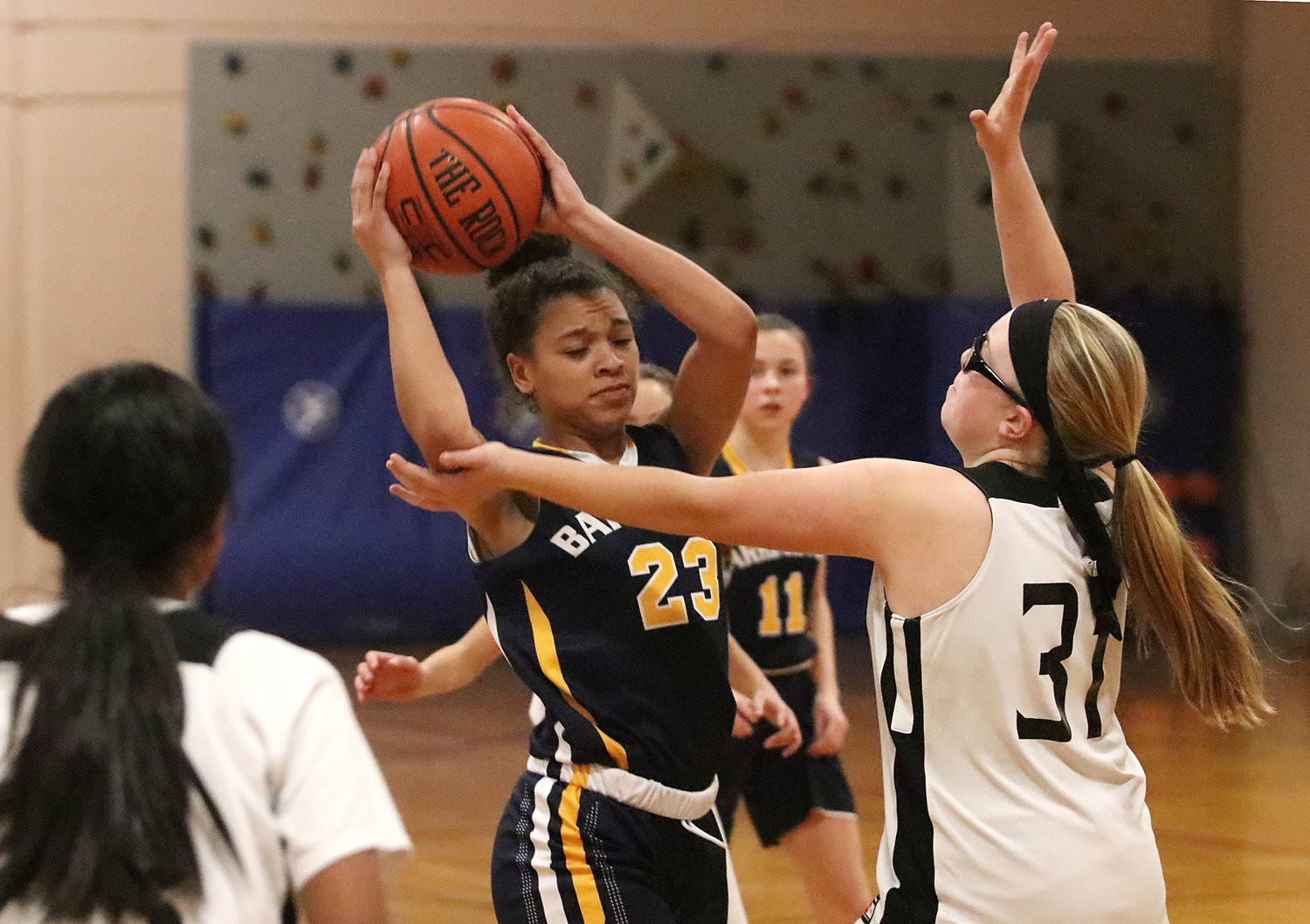 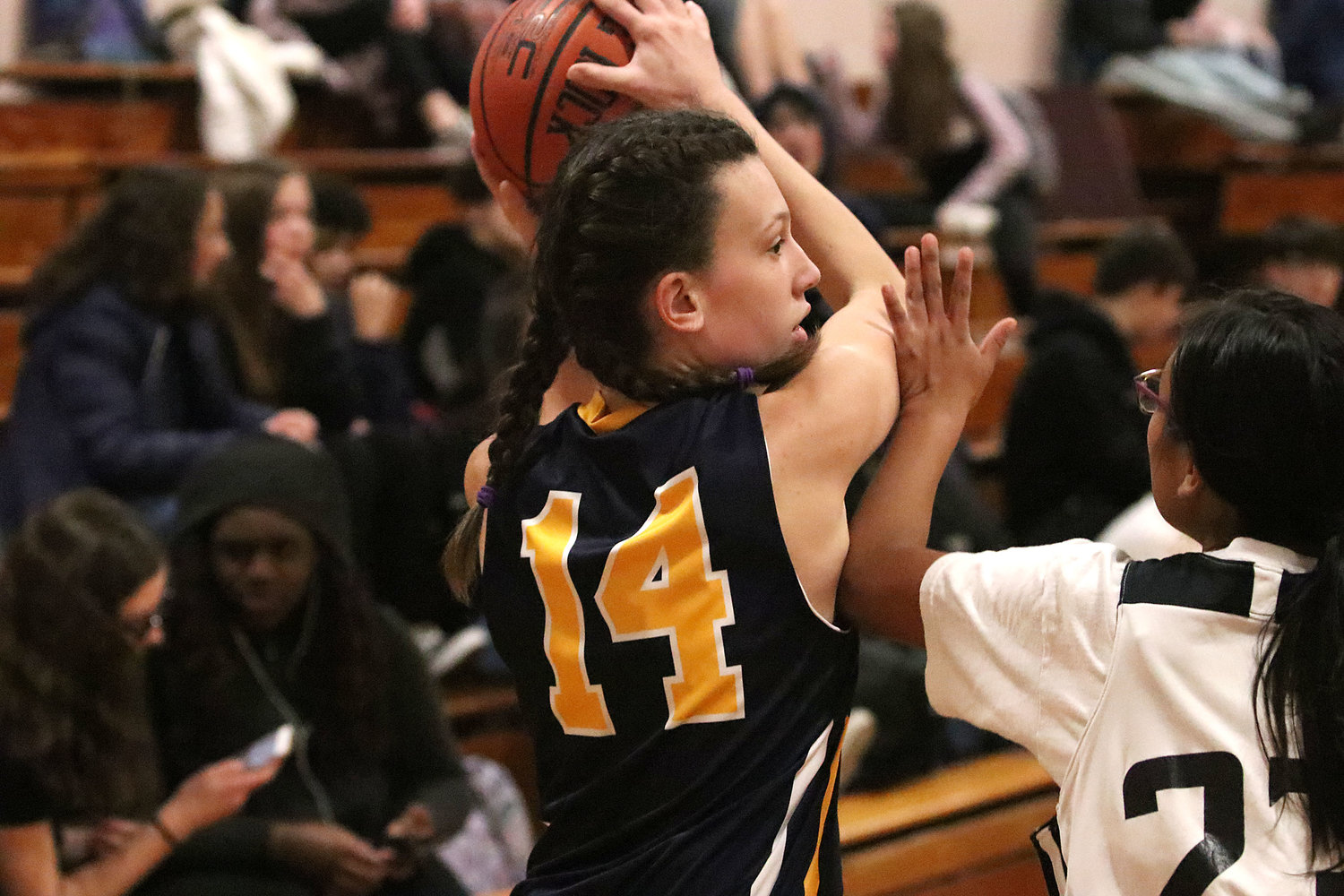 Maddie Gill pulls the ball away from a KMS defender.
Photo by Richard W. Dionne Jr. 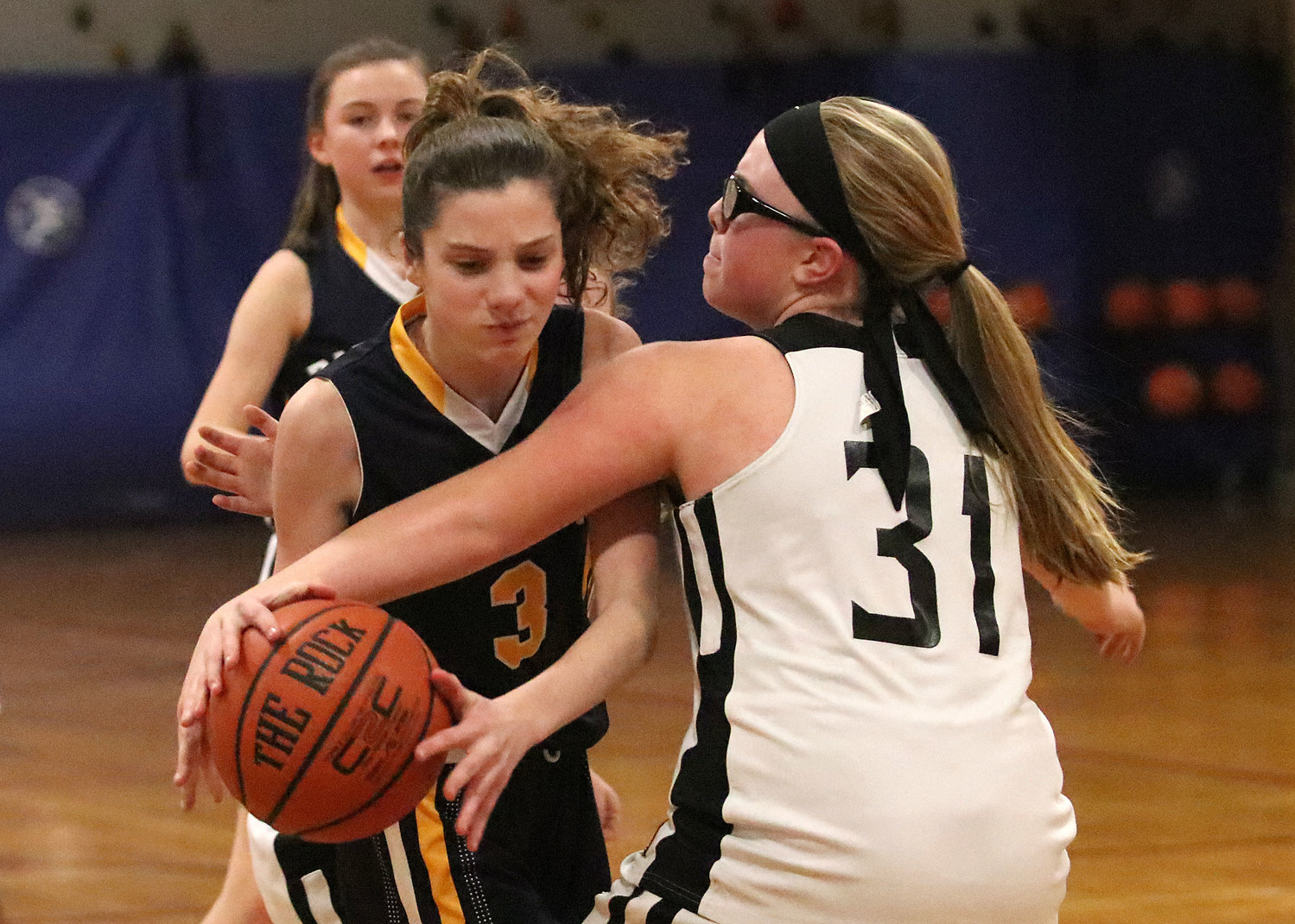 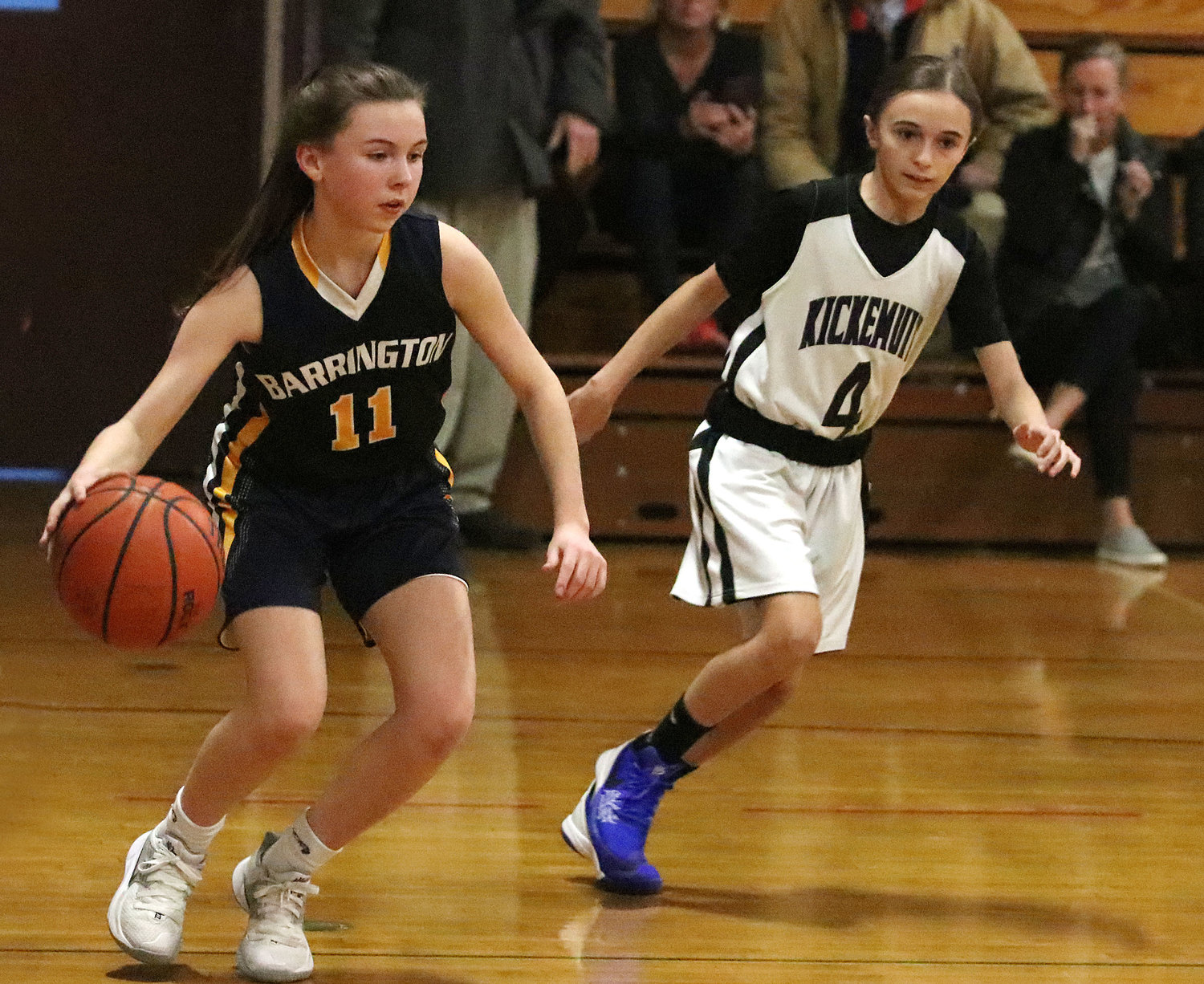 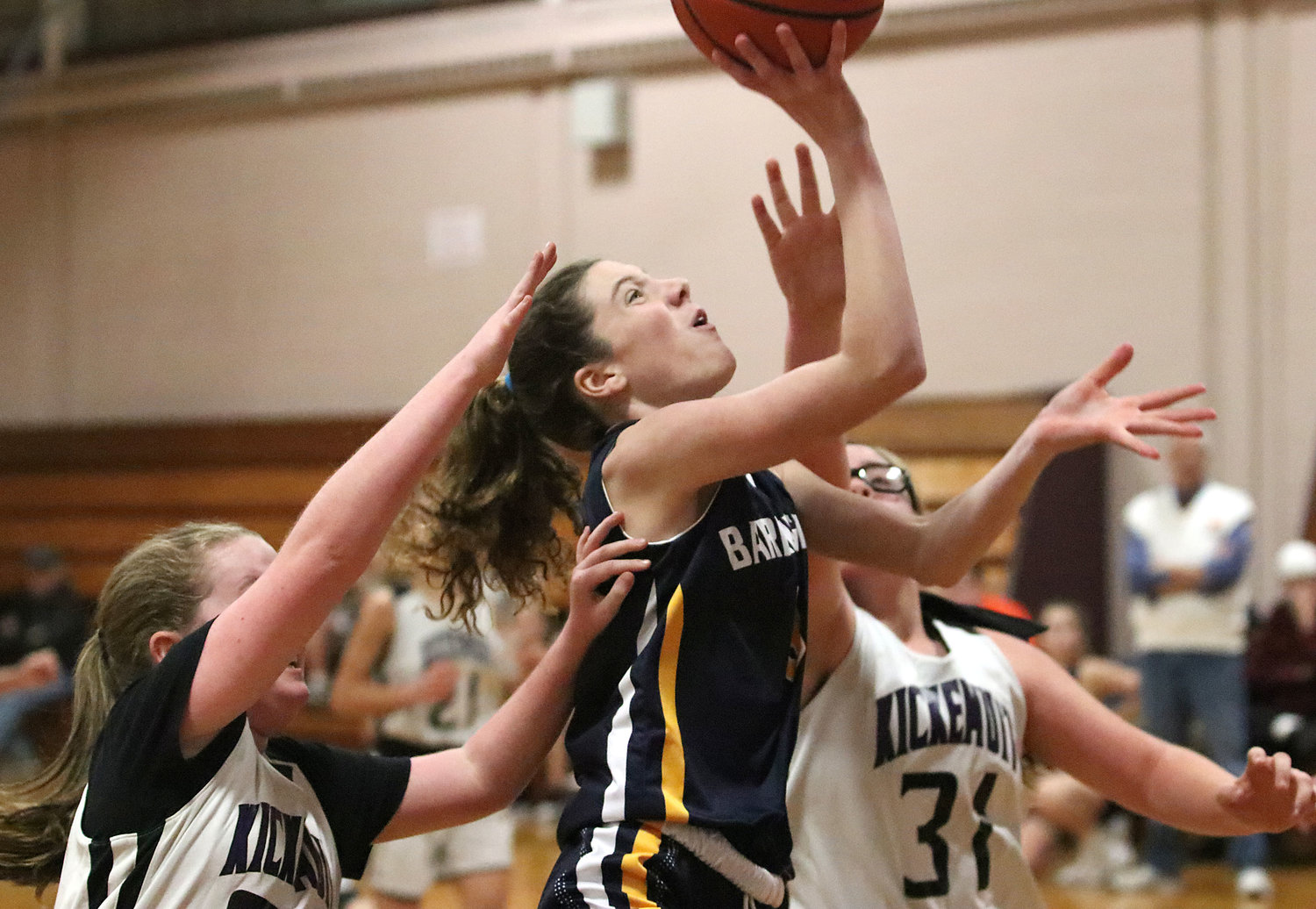 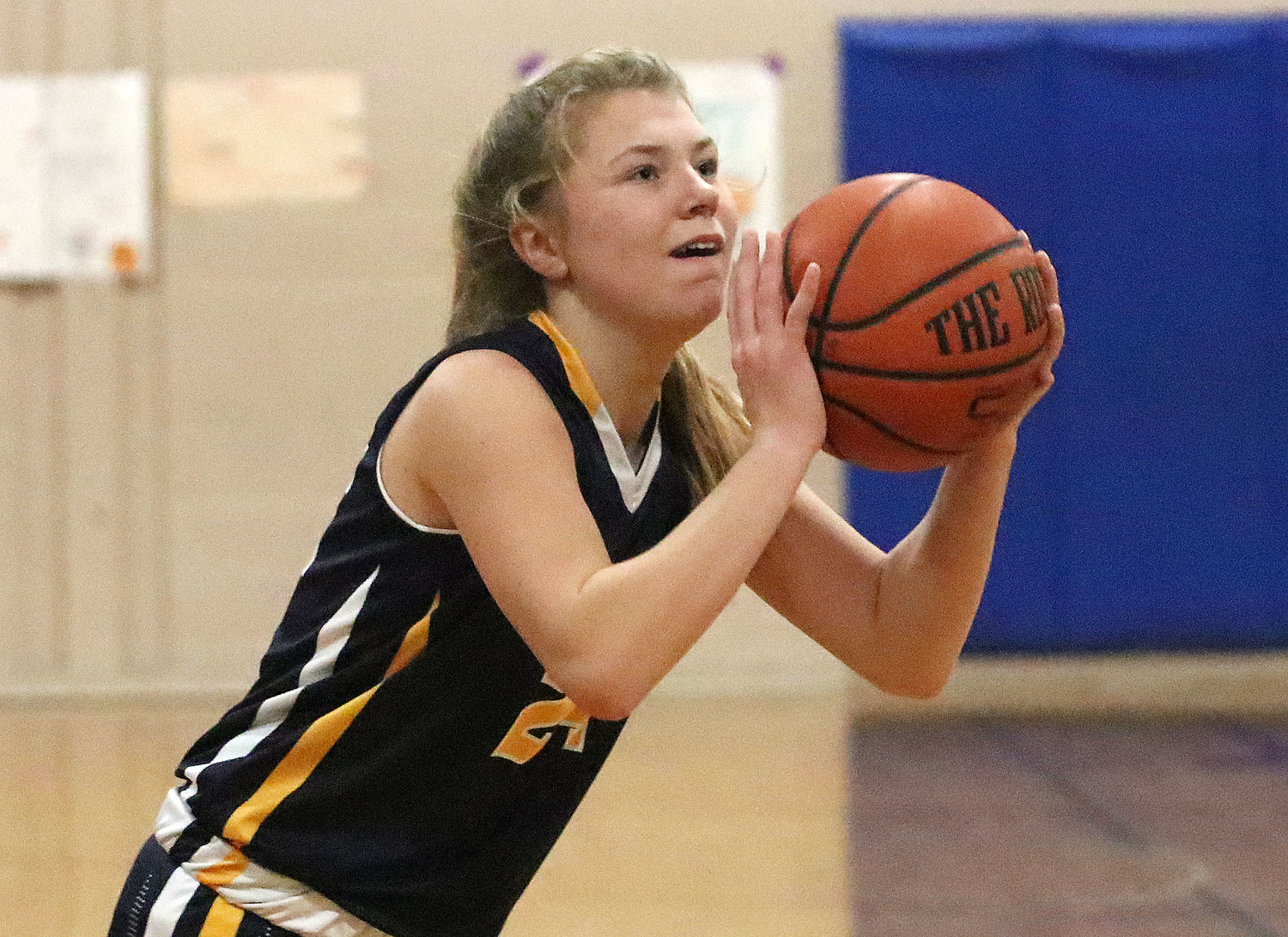 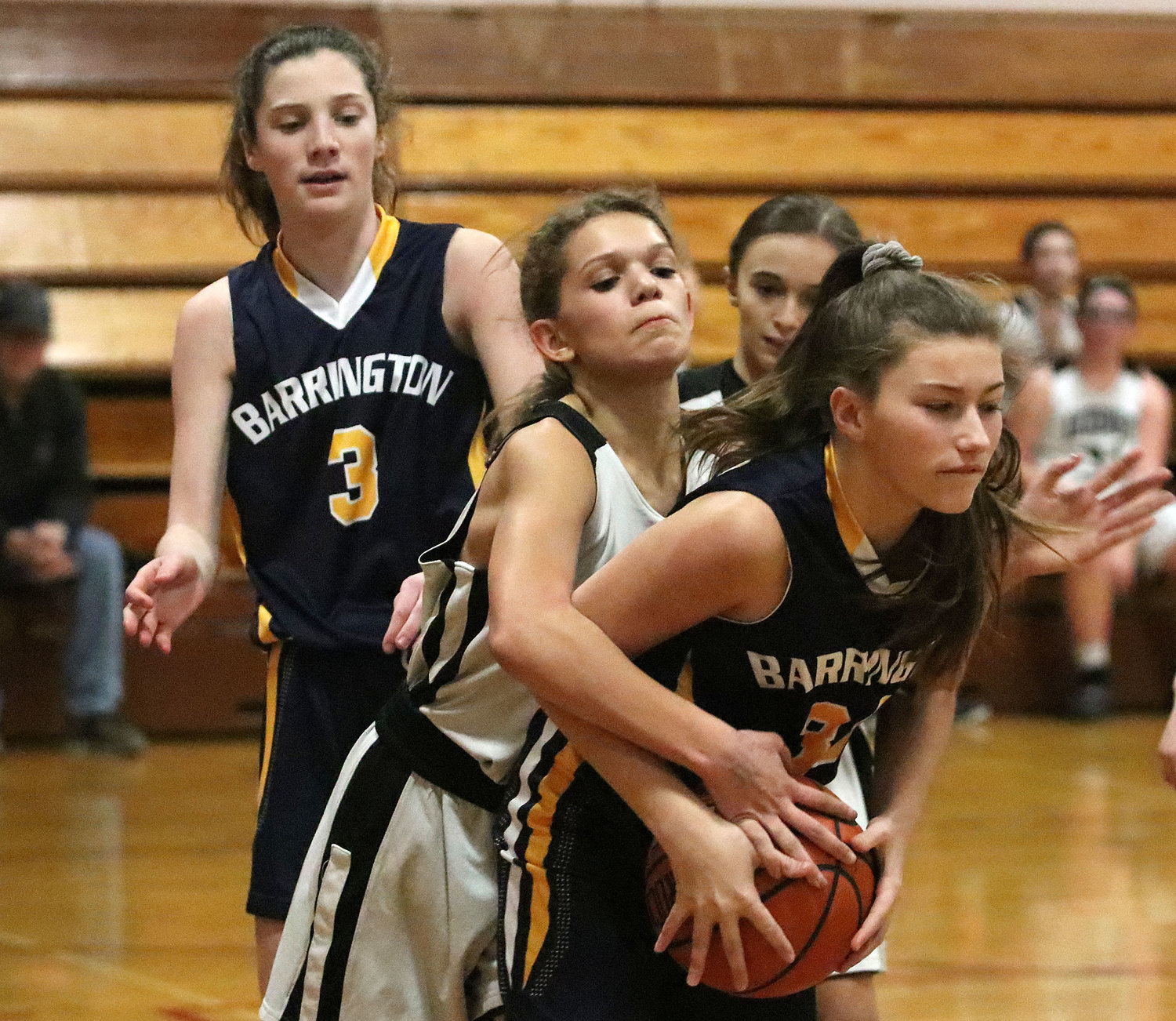 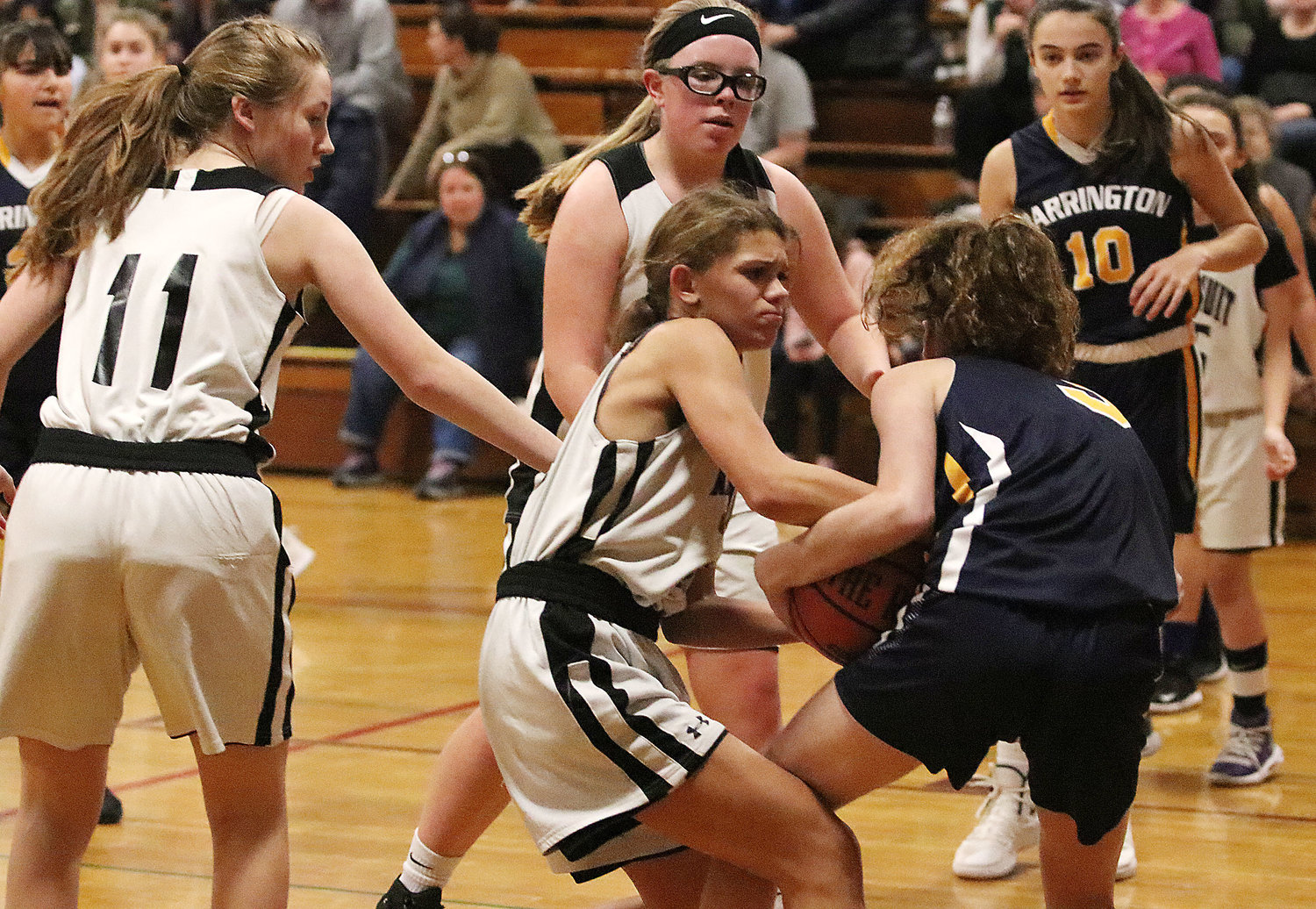 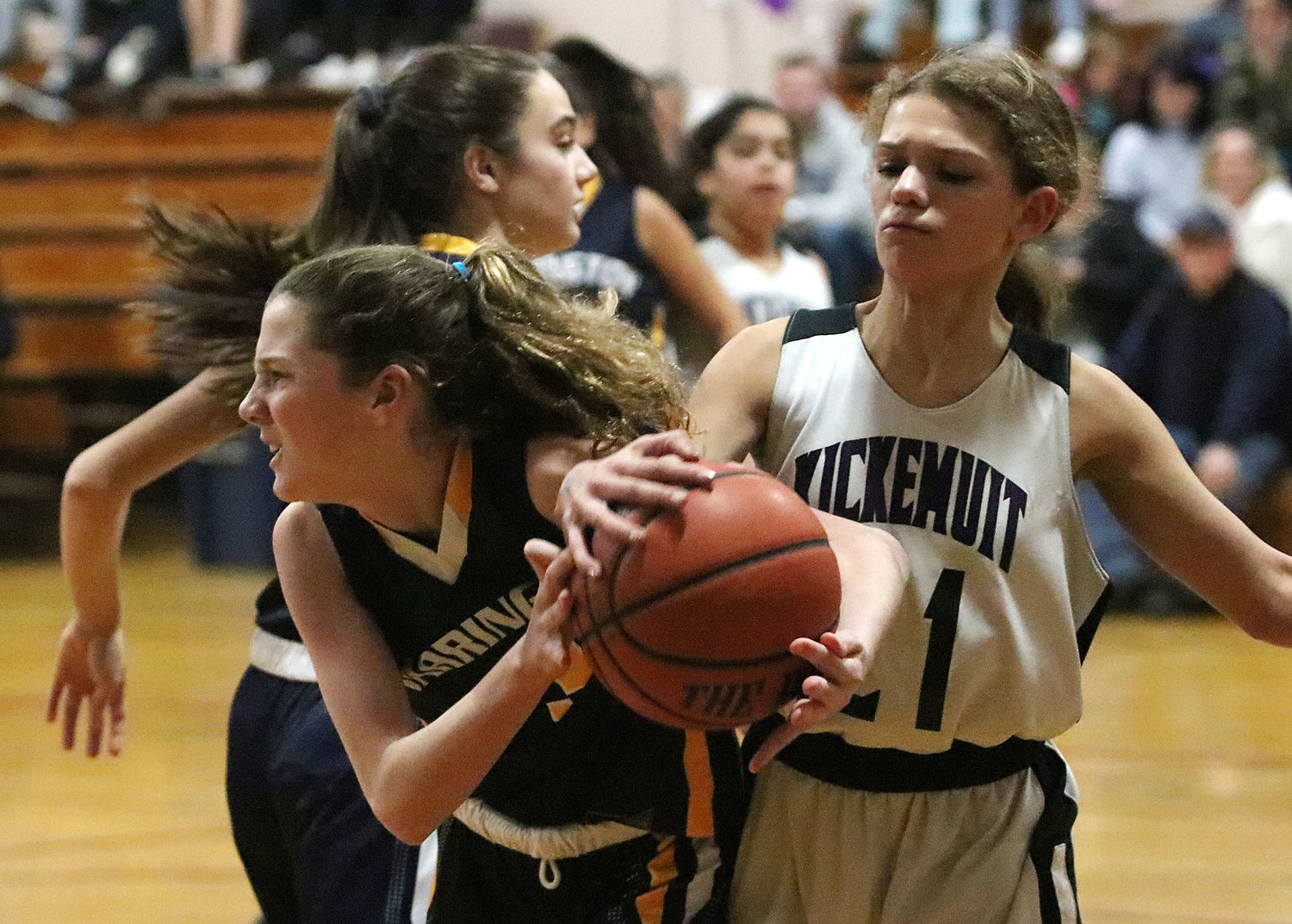 When the 2019-20 Barrington Middle School girls’ basketball season began, head coach Mike Topazio hinted that maybe this was going to be a team to be reckoned with as the year rolled along.

The Lady Eagles finished the regular season undefeated and earned a bye in the upcoming playoffs, which are scheduled to begin this week.

The icing on the cake occurred last Thursday afternoon when the Barrington girls defeated their old rivals from South Kingstown, Curtis Corner Middle School, 46-38, in a game that had as much drama and excitement as any of their other previous confrontations.

For the record, the Lady Eagles improved to 2-4 against the tough Curtis Corner kids since Coach Topazio has been in charge of things on the Eagles’ bench. The last time Barrington had defeated Curtis Corner was 2012 in the playoff quarterfinals. Since then they had lost to them in 2015 in the state semifinals, and in the finals in 2013, 2016, and 2018. Last week’s victory was a great confidence booster. Those two middle school powers could meet again in another state championship final this time around.

According to Coach Topazio, this was Barrington’s fifth division championship and third undefeated regular season.

“We started slow out of the gate against Curtis Corner and were down, 19-10, when Dani Ceseretti hit a 3 at the buzzer before the half to bring the score to 19-13 at halftime,” said the coach. “Coming out of the half with the ball in our first possession, Dani hit another 3 to cut it to 3 points, and momentum changed for the better.”

Dani Ceseretti has been a catalyst for the Lady Eagles ever since she was a starter as a sixth-grader. Now in the eighth grade, she has developed into a bonafide star.

Dani, Maddie Gill, and Riley Graveline combined for 29 second half points which set the tone the rest of the way.

“Dani did her magic all game long shredding their zone and piling up assists,” said Coach Topazio, “but Riley Graveline was the star at the end, hitting all 8 of her points in the last three minutes. Up 3 with two minutes to play, she scored our next five points to put us up by 8 with under a minute to play. Then, Dani salted it away with a couple of free throws. We beat a very good Curtis Corner team.”

Maddie Gill finished with 16 points, Dani Ceseretti had 15, and Riley Graveline had 8.

As it looks right now, the Lady Eagles will be drawing a first round bye in the playoffs, and then open at home on Thursday against an opponent to be announced.