Casey Lambert records her 1,000th assist for the Eagles

Casey Lambert records her 1,000th assist for the Eagles 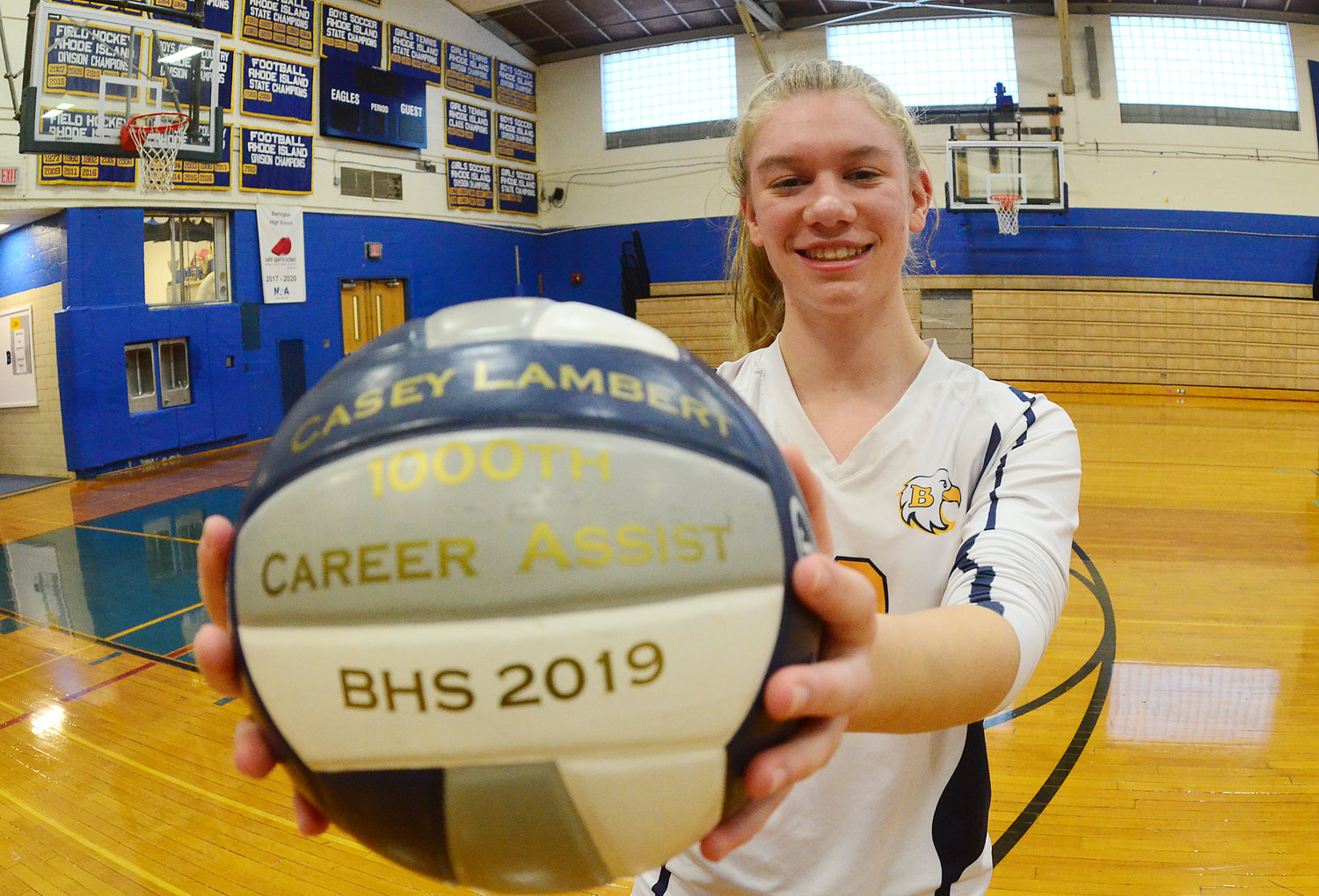 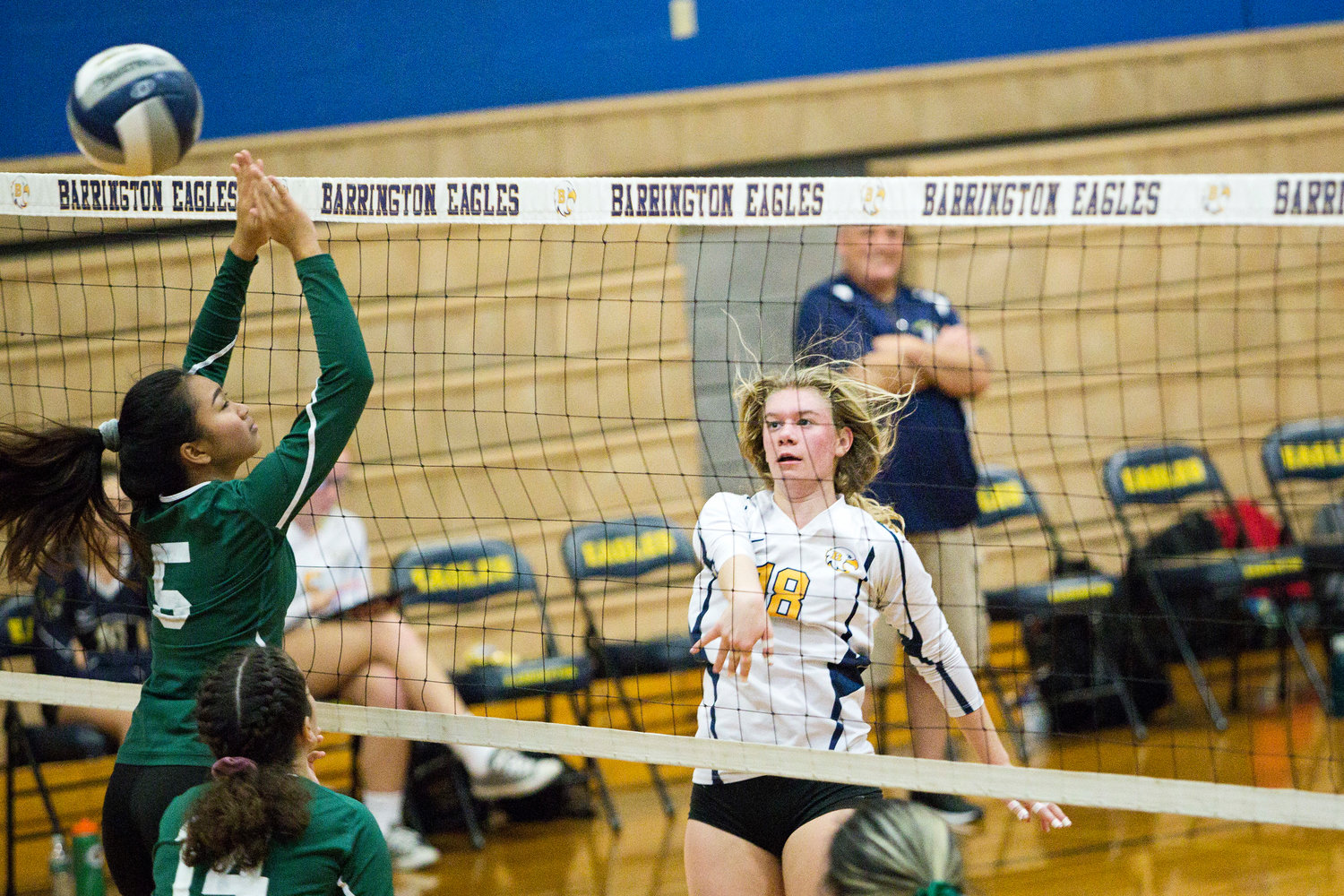 Barrington's Casey Lambert (right) follows through on a kill during an Eagles' match this fall. Casey hit the 1,000 career assists mark during an Eagles' playoff game this year.
Previous Next
Posted Tuesday, December 10, 2019 4:00 pm
By Josh Bickford

That milestone was made even more impressive by the fact that Casey reached that mark in her junior year. Oh, and she has only played varsity volleyball for the Eagles for two seasons.

"Technically it's only been two seasons," Casey said. "It's crazy. People say, 'Oh, 1,000 assists is pretty crazy… and you're not even a senior yet.' It's my third year in high school, but technically it's been only two seasons.

It's still really crazy. I just keep this (the commemorative volleyball) on a shelf, and I'm like 'Yeah, I did that.'"

Casey said she has been fortunate to play with some very good hitters, including recent Barrington High School graduate and current Yale University student Maile Somera.

"I had great hitters all around me," Casey said. "I have had a really good relationship with a lot of my hitters..."

Casey's journey to 1,000 assists started during her sophomore season, where she tallied 670 assists. The mark set a single-season record at Barrington High School. She broke another BHS record for most assists in a single match, with 56. In addition, she helped the Eagles reach the Division One finals.

Casey entered her junior year confident she could reach the 1,000 assists mark, making it her personal goal. She worked with her coaches — Ron Enos is the BHS head girls volleyball coach, and Christian Lambert, Casey's dad, is the assistant for the girls team — to optimize her assist opportunities.

While the team struggled to notch wins, Casey and her Eagles teammates enjoyed pockets of success all season long. Casey finished the regular season just shy of the 1,000 assists mark, but earned a second chance to hit the milestone when Barrington qualified for the playoffs.

Casey entered the quarterfinal match against North Kingstown needing 14 assists to reach 1,000. The BHS junior finished the game with 18 assists and memorable distinction.

"I actually didn't even know until the end of the game," Casey said. (Because it was a playoff game, officials did not stop the match and present her with the commemorative ball in the middle of the action.)

"I found out and my coach was like 'Here's your ball for 1,000 assists.' I was jumping around and going crazy. It was really cool."

Casey's coaches and teammates and fans celebrated the achievement, and the BHS junior was also awarded for her play with a spot on the Rhode Island Volleyball Coaches Association All-Division team.

Casey started playing competitive volleyball when she was 10 years old. Early on, she played outside hitter but eventually became a very well-rounded player.

"She's a defensive-minded player," said Mr. Lambert. "Because of her physical stature — she's only five-foot-three, five-foot-four — she knows her career in volleyball is going to be on the defensive side of things. She's had to come to grips with that.

"One of her greatest strengths, in addition to her being a defensive-minded player, she's very versatile. She grew up playing the game, not knowing what position she was going to play. I never coached her to be a specific position. So, by the time she was a sophomore, going into that volleyball season in the fall, varsity needed a setter. We had nobody that we trained. We had nobody that was interested. So she took on the position and we were very confident with her ability because she was such a versatile player."

Casey, who has played club volleyball for years, said she fully intends on continuing her volleyball career after high school. She has reached out to college volleyball coaches.

"I'm looking to be a ds (defensive specialist) libero, not actually setting in college," said Casey. "It's just because of my height. Setting will definitely be my high school position forever. But yes, volleyball will definitely stay in my life forever."

In addition to volleyball, Casey is also very active with clubs at the high school. She is a member of the yearbook committee and the student council. Casey, who is also a member of the Barrington High School art club, said she really enjoys painting.