Flags coming back into focus for Barrington Town Council

Council expected to discuss flags at a meeting next month

Members of the Barrington Town Council will be meeting this summer to talk about flags.

Toward the end of the June 6 meeting, councilors took a moment to discuss what items they planned to include …

Flags coming back into focus for Barrington Town Council

Council expected to discuss flags at a meeting next month 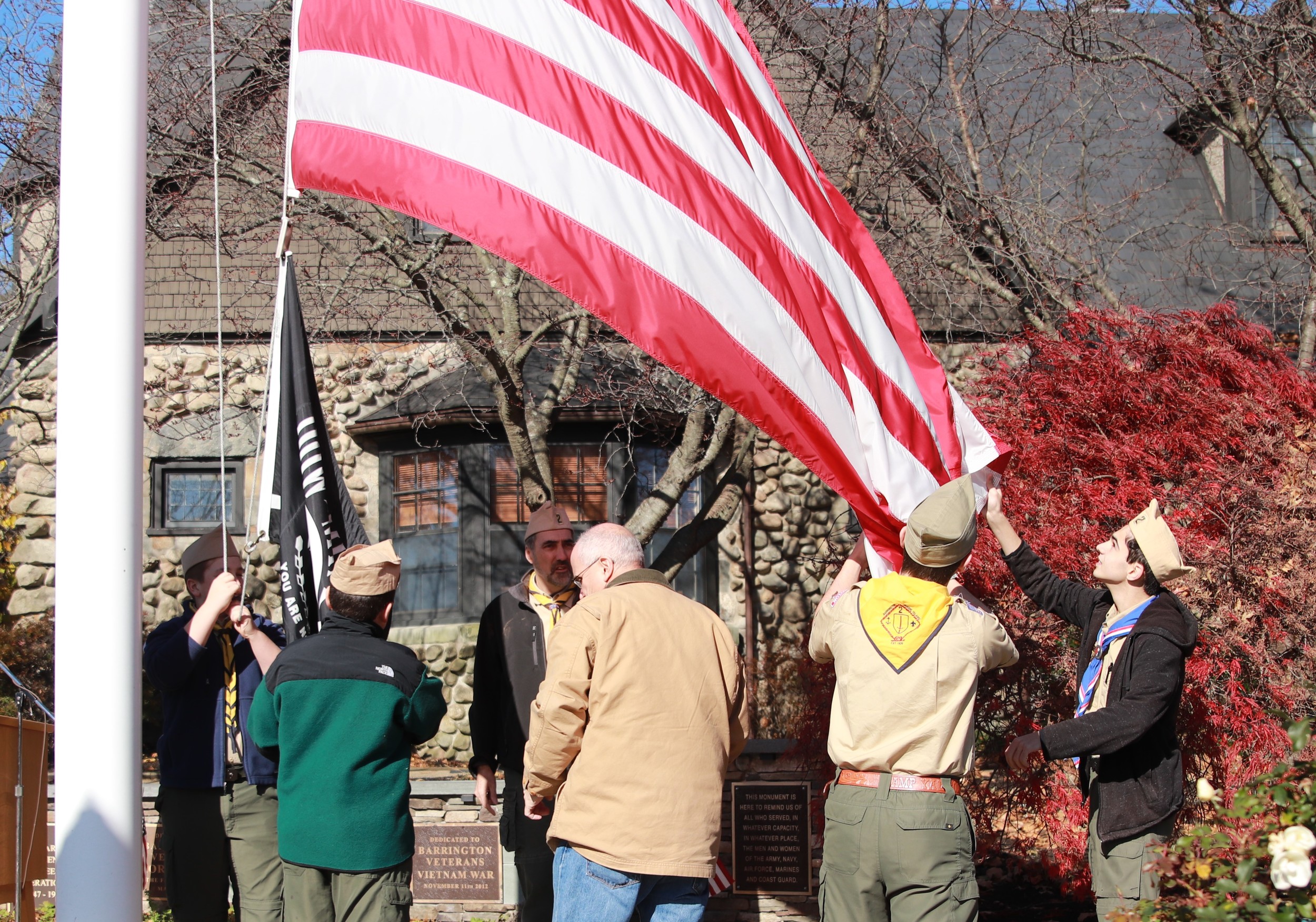 Members of a Barrington Boy Scout Troop raise the flag during a Veterans Day ceremony outside Barrington Town Hall a few years ago.
Posted Wednesday, June 22, 2022 11:47 am
By Josh Bickford

Members of the Barrington Town Council will be meeting this summer to talk about flags.

Toward the end of the June 6 meeting, councilors took a moment to discuss what items they planned to include on a future meeting agenda. A number of issues made the list, including whether the town should forgive the cost of police details for community events, and the possible introduction of an ordinance that would prohibit vaping or smoking cannabis on public property.

Council members also stated that they wanted to hold a meeting this summer to discuss flags. Barrington Town Council President Michael Carroll said the meeting could involve the flag policy and/or which flags would be flown on the pole outside Barrington Town Hall.

More than a year ago, the town council adopted a policy that codified its prior approach — it gives the council and town manager the power to decide which flags to fly on the pole. It also states that an individual member of the council cannot block the manager from raising a flag, but can call for a meeting within two days to discuss the situation.

During the meeting where the council adopted the policy, some residents cautioned against the move, while others supported it.

The town’s solicitor, Michael Ursillo, told councilors that their decision about which flags to fly on the town hall flagpole was a form of government speech and that the council had the right to decide.

Some people in town, including resident Matt Medeiros, believe the council overstepped when adopting the policy.

Medeiros drafted a letter to the editor earlier this spring, following the U.S. Supreme Court’s ruling that the City of Boston violated the Constitution by refusing to fly a Christian civic group’s flag at city hall while raising the banners of other organizations. In that Supreme Court ruling, the justices unanimously said that Boston could not discriminate against the religious group once the city decided to make the flagpole available to other organizations.

In his letter to the editor, Medeiros referenced the U.S. Supreme Court decision: “That ruling should not have surprised the Council. Opposition to Boston's (and therefore Barrington's) discriminatory flag-flying brought together a diverse coalition of respected organizations that included the conservative Pacific Legal Foundation, the liberal ACLU, the American Legion and Notre Dame Law School, among others. With concerned parties from Left to Right demonstrating that Barrington likewise was acting illegally, the Council should have abandoned its bunker mentality and stopped wasting town resources.”

The Barrington Times recently asked Carroll if the U.S. Supreme Court ruling would impact Barrington’s flag policy. He said that the situations were different — “…what we do is government speech. We as a council, representing the community, speak on what our values are. That’s different than what Boston did.”

Carroll said he expects some people in town will be eager to discuss the flag policy, adding that he believes the town’s policy was good because “it started some good conversations that needed to be had in Barrington.”

Medeiros, in his letter, disagreed: “Apart from its illegality, there are other reasons to end this sorry history. This has been the most divisive, mean-spirited action by the Council in the 45 years I have lived here -- even trumping the Town's 2019 illegal plan, now abandoned, to discriminate against certain homeowners by selectively amending their real estate valuations annually, and then tormenting those who dared to object…

“When did Barrington voters elect the Council to serve as ‘thought police,’ approving ‘flavor of the month’ organizations and rejecting those not fortunate enough to be cozy with a current council member? Barrington residents deserve better from their government than such insulting discrimination.”