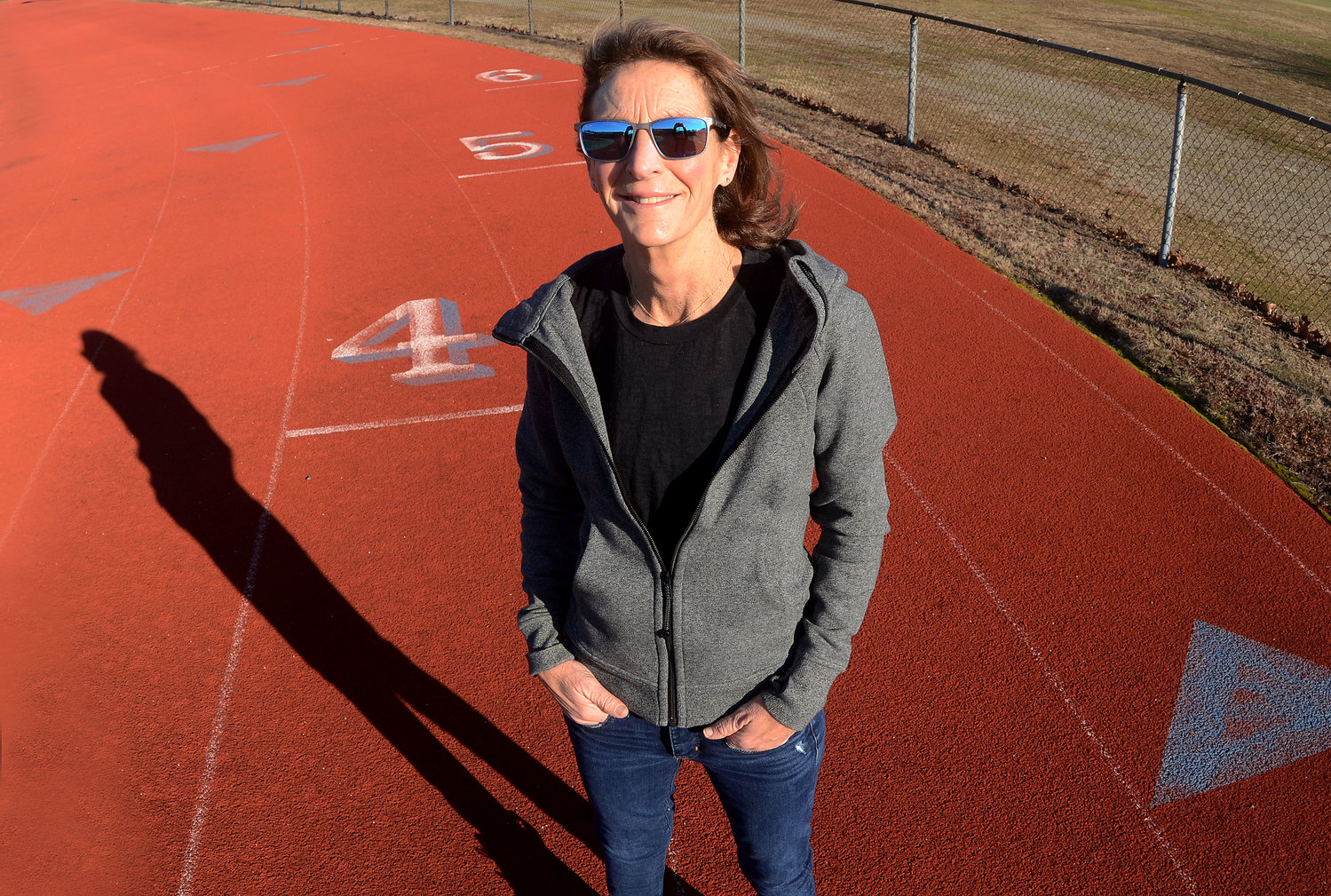 Annmarie Gower was an All-American runner in college and beloved track and cross-country coach for more than 30 years at Barrington High School. She stepped down recently, stating “The last couple of years with COVID and the school time change the day became really long. I couldn’t start my practices until 3:45. Personally for me it became difficult as is the case for any coach who is a teacher.”
Photo by Richard W. Dionne Jr.
Posted Wednesday, January 27, 2021 6:10 am

Personally for me it became difficult as is the case for any coach who is a teacher.”
Annmarie Gower

The kids made it fun. I never laughed so hard because we had fun.”
Annmarie Gower
BY MIKE SCANDURA

Perhaps Barrington High School Director of Athletics George Finn best expressed how important Annmarie Gower has been to the school’s girls’ cross country, indoor track and outdoor track teams. Teams she no longer will coach since she stepped down after the 2020 cross country season.

“She’s been doing it for a number of years (35) and is looking for other opportunities for herself,” said Mr. Finn. “She’s been an integral part of the program for years. For a person with that amount of longevity to step down and because she’s done a great job for our programs, it’s disappointing to see her go.

“I certainly understand and respect her decision.”

The decision to step wasn’t done on a whim.

“It was a hard decision,” said Ms. Gower, who also coached girls’ basketball from 1984 to ’91. “The last couple of years with COVID and the school time change (she’s a physical education teacher at the Barrington Middle School, which dismisses students at 3:15 p.m.) the day became really long. I couldn’t start my practices until 3:45.

“Personally, for me, it became difficult, as is the case for any coach who is a teacher.”

Following is a list of how successful Ms. Gower has been:

• Her cross country teams notched one New England championship, three state championships and 11 class titles. And from 2004 through 2020, the Eagles were a combined 155-9 in dual meets.

What Ms. Gower’s teams accomplished during the 1994-95 school year almost defied logic because Barrington (at the risk of using a baseball metaphor) captured the Triple Crown. That’s another way of saying the Eagles won state championships in cross country (Barrington’s first in 17 years), indoor track and outdoor track.

“That was fun,” said Ms. Gower. “That’s a moment of which I am proud. I don’t think any other woman has done this as a head coach.”

Good point. But close behind was a Barrington relay team’s performance during the last indoor track season (2019-20).

“One of my most exhilarating moments was the last indoor track and field season,” said Ms. Gower. The 4x400-meter relay team (Jordynn Palethorpe, Julia Howarth, Tess Gagliano and Violet Gagliano) was second in New England.

“They were fun. They worked so hard and they went right at it. To see the way they ran at the New England’s was great. Those seniors went so far.”

Just like teachers can suffer burnout, the same can be said of coaches who have been plying their trade for decades. That wasn’t the case with Ms. Gower.

“It always was a passion for me to work with kids,” she said. “Each year brought different challenges. I gave it up for a while but came back. I coached my (two daughters) when I took time off, and then I came back to it because I missed it.

“The thing was that’s all I do. It was my entertainment. There were so many fun parts about it. There were long and tiring days. But once I got to practice it was what I did. The kids made it fun. I never laughed so hard because we had fun.”

Ms. Gower brought an impressive resume’ with her to Barrington High.

A 1982 alumnus of Rhode Island College, in cross country she earned All-American, All-New England and All-Region honors and ran the all-time best time in Anchorwomen history in the 5,000 meters (17:43) – a record that still stands today.

She competed at the NCAA Track and Field championships in 1982 and 1983.

For the 2017-18 school year she was selected as the National Federation of State High School Association Section I (i.e. the six New England states plus New York and New Jersey) Outdoor Track and Field Coach of the Year.

In addition she was voted the 1995 Rhode Island Schoolgirl Coach of the Year by Words Unlimited, the state-wide organization of sports writers, sportscasters and sports publicists.

“I was a distance runner at Rhode Island College,” said Ms. Gower. “You can learn and teach yourself all that. It’s not the sport alone. It’s a matter of helping kids become better athletes. I enjoyed working with sprinters. They were different individuals.

“There are so many personalities tied into each team’s dynamic. It was exciting. I was the one who never did the same thing twice. Certain things you can teach. Every individual and every event is different from year to year. For me it was a challenge but it was exhilarating.”

Mr. Finn didn’t hesitate when asked why Ms. Gower has been so successful with the Eagles.

“It goes back to her passion for the sport,” he said. “She’s forged so many great relationships with people over the years. A number of alumni who were her athletes have profound respect for her.”

The fact is she cares about the whole person. It’s not about the athletic accomplishments. It’s the whole package.

“There are multiple facets to what she has brought to our programs – facets like dedication, commitment and knowledge of the sports. She’s a caring individual who’s concerned about her athletes. She tries to get the best out of all the students with whom she works.”

At the risk of stating the obvious, the fact Ms. Gower’s teams have been so successful hasn’t been a matter of luck.

“The coach is very important,” she said. “When the kids are motivated and hard-working, they love their sports. It comes down to fun. We had a good time. Some of the times when we didn’t do so well, it was because they were nervous. They always wanted to please the coaches but they would do anything because they were having fun and respected everyone. They respected each other. They worked hard for each other.

“I had some girls who became senior captains. The young girls looked up to them. They knew what was expected and weren’t afraid to work hard.”

Given Ms. Gower’s passion and love of her sports, might she consider returning after a hiatus?

“At the moment, I made a decision that was right for me,” she said. “There are other things I would like to pursue.”