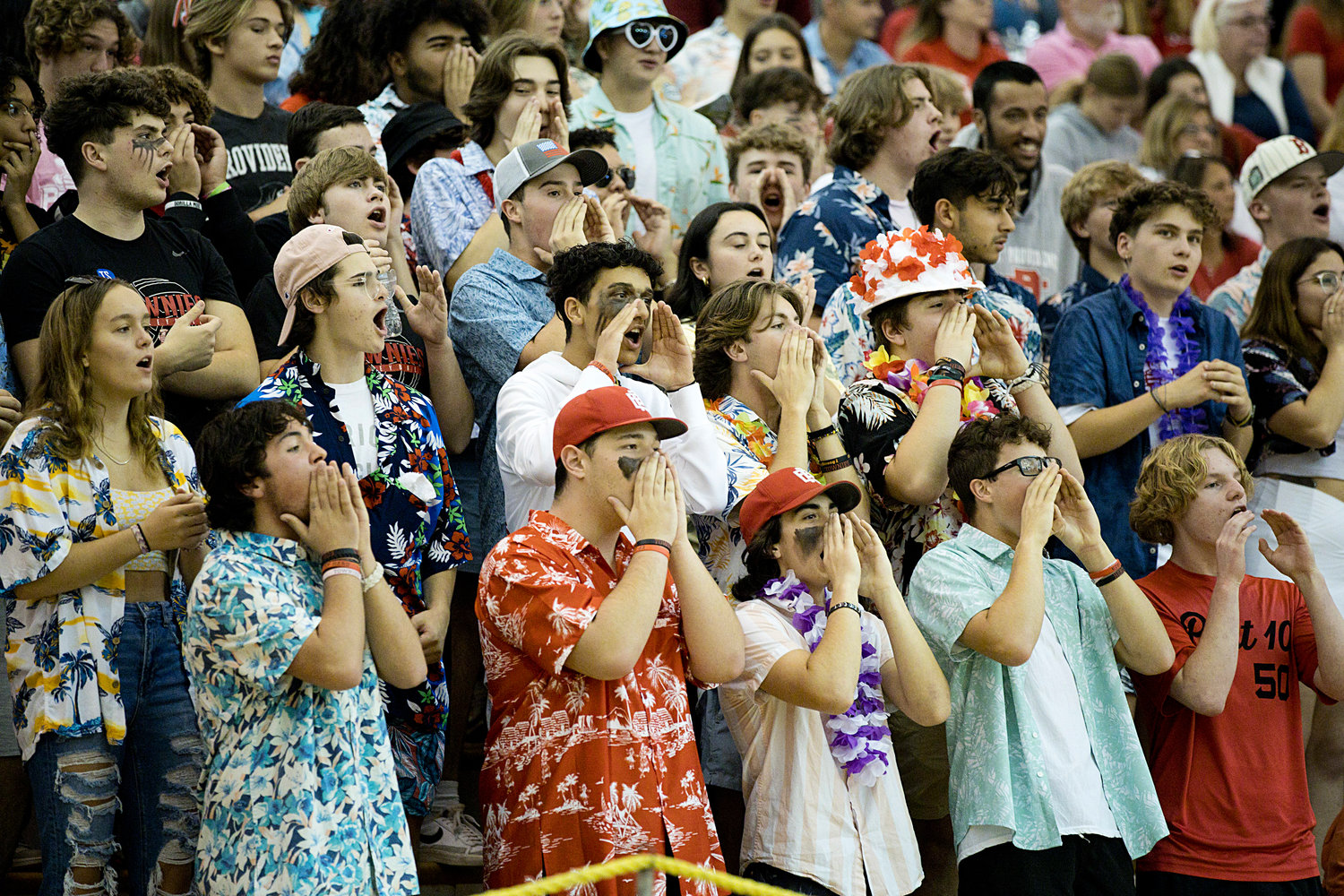 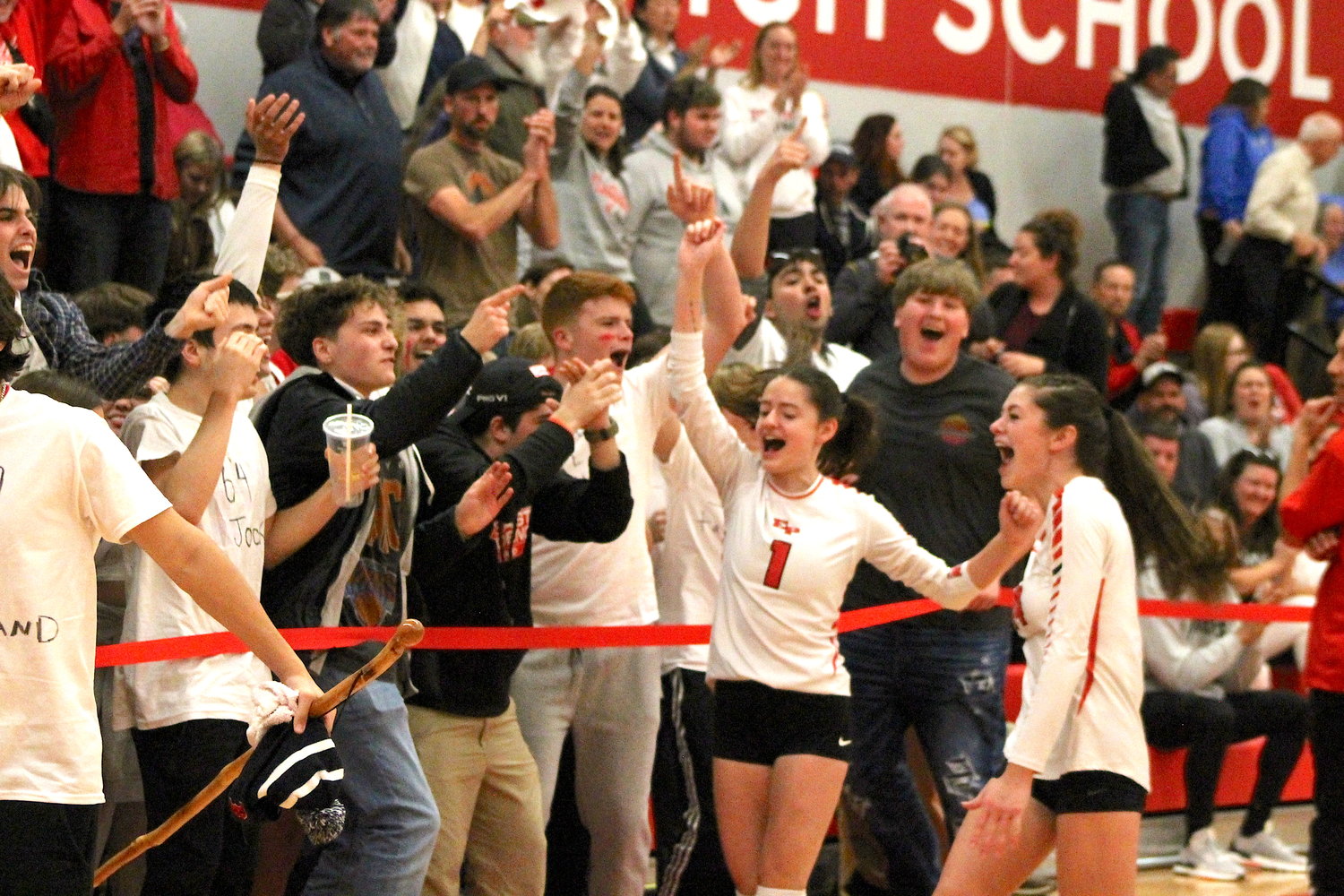 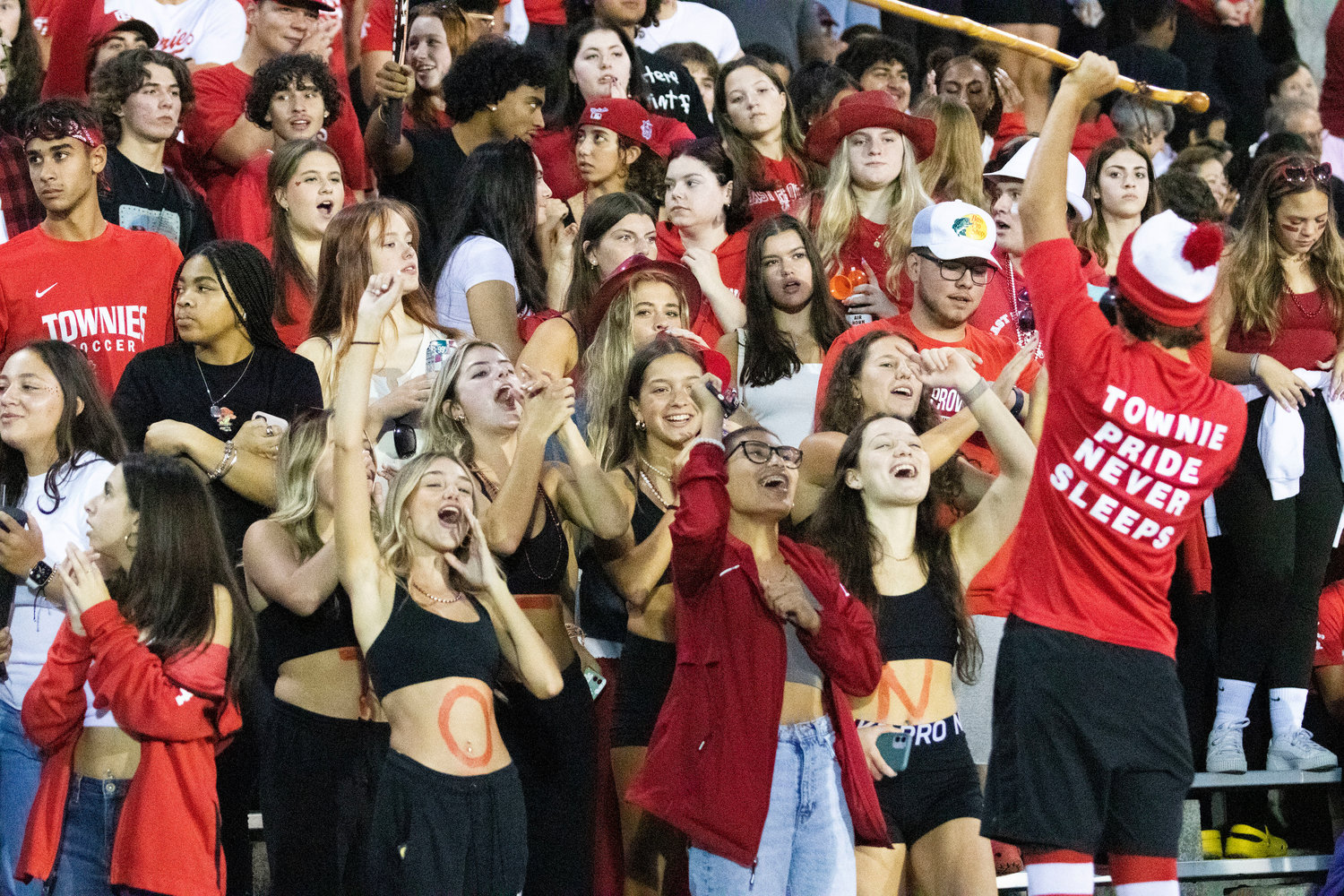 "The Herd" student sports boosters group is led in a chant by one of the crew leaders Billy Fitzgerald (at right, "Townie Pride Never Sleeps" t-shirt) during an East Providence High School football game earlier this fall at Pierce Stadium.
Photo by Richard W. Dionne Jr.
Previous Next
Posted Wednesday, December 7, 2022 6:00 am
By Mike Rego

EAST PROVIDENCE — What started nearly a decade ago by a group of student athletes at East Providence High School as a way of supporting their peers in a collective fashion has since been nurtured by staff there and the next generation of Townies into something truly worthy of its name.

“The Herd,” the student sports boosters spawned by members of the Class of 2015, has become what its title was meant to evoke and then some at EPHS. There’s actually strength in the number of kids involved with the crew and in the desire to be a force for good, to be the embodiment of the ethereal notion of “Townie Pride” that resonates throughout the school district and the city as a whole.

“’The Herd’ has been a huge asset to East Providence High School this year,” said second-year principal Bill Black. “Many students have invested their time and enthusiasm to energize our community and keep Townie Pride flowing during our games both at home and on the road.

“And the culture and climate of the school has been positively affected by ‘The Herd.’ Students, staff and families speak glowingly about them and say how fun it is to attend the games this year. The students of ‘The Herd’ have made a massive difference on the high school experience this year at EPHS and we are fortunate to have them.”

Joe Andrade, in his 17th year as a History/Social Studies teacher in the district, has been one of the biggest backers of “The Herd” since in started. Earlier this calendar year, the School Committee formally adopted the recommendation of the administration to recognize “The Herd” as an official club at the high school with a compensated advisor. Andrade was the first and obvious choice to fill the role.

“I enjoy it,” said Andrade, who is also about to start his seventh season as the Townies’ head coach of boys’ basketball. “It’s beneficial. I love to see when everyone is supporting each other, having fun, athletes, non-athletes. This is their experience, so they should enjoy it. And if I’m not helping them, then I’m not doing my job.”

Of what inspired him to take such a hands-on approach with “The Herd,” Andrade added, “It’s about getting them to support other student athletes, to build school spirit. We have different themes at games (like “Hawaiian Shirt Night,” “Adam Sandler Night,” “Black Out,” “Pink Out,” “Formal Dress-Up Night,” “Country Club vs. Country Night”). But basically I just want them to have fun. I want them to have fun at school, enjoy the experience and go from there.”

Senior Chris Riel has been among the catalysts of the new “The Herd” gaining greater traction in recent years, joining Class of 2022 grad Ryan Colson in helping put the current crop of members together.

He said he took his inspiration from his older sister, Kara George, and her friends who actually started the group eight years ago and from the likes of then upperclassmen Owen Charron, Sam Budnick, Eric Long and Daniel Andrade who were the gatekeepers of the group when he turned up to EPHS as a freshman in the fall of 2019.

“They had the mindset, so we just kinda wanted to relive that,” Riel said of his desire to be a part of and to build upon “The Herd.”

He added, “We definitely got more people involved once we made the Instagram (feed) and Mr. Andrade got involved because it was more labeled with the school and we got a lot more kids involved over time.”

“The Herd” has its origins in the efforts of former EPHS students, mostly seniors, during the 2014-15 term.

Athletes the likes of Tyler Maxwell, Kyle Marquis, Marc Lavalley, Tyler Lockard, Adam Duarte, Chris Santos, Aaron Amaral and George among others came up with the idea of gathering up a host of fellow students to attend their and other’s sporting events.

“It was a bunch of kids in our class and surrounding classes,” said Maxwell, who still assists in chronicling EPHS sports as a freelance photographer in the area, including here at The Post.

That group also gave the group “The Herd” moniker, which has stuck around through a few attempts to continue the lineage.

“We randomly came up with the name based off a large group of animals,” Maxwell remembered. “LaSalle (East Providence’s arch-rival) called themselves ‘The Beehive,’ so we picked ‘The Herd.’”

The original “Herd” went to football games initially and mostly girls’ volleyball games in the fall of 2014. Then, as he remains now, girls’ volleyball game head coach Alex Butler “was a huge supporter of us getting rowdy and chanting,” Maxwell continued. He also credited Andrade, noting “He’s always been supportive of it. I know that he’s doing great getting students involved now.”

Not much has changed, actually, when it comes to what is considered to be the essence of “The Herd.”

“It’s cool to see it come back,” Maxwell added. “It’s just all about the atmosphere in high school sports, to have fellow students there at all your games dressed up and going crazy. It’s just good for the school, athletics and Townie Pride.”

As of this fall, some 160 students are associated with “The Herd” through a recruitment effort led by Riel as well as juniors Jason Russo and Billy Fitzgerald.

“We’re just doing the right things, not getting into any trouble,” said Fitzgerald. “We just talked to people in school. We post on social media, Twitter, Facebook, Instagram, Snapchat, everything. We post on all social media platforms. We’re just trying to get more people to show Townie Pride, to show up to the games.”

Of his role often leading the section into cheers and chants, Fitzgerald said Russo, who does the public address announcing for EPHS soccer games, asked if he wanted to do the same for girls’ volleyball matches and “it just went from there…I kind of took charge one day and it just worked.”

Russo said he was inspired to engage because he wanted to support his classmates. “I think it’s about being there for the student body. It’s important to support each other,” he explained. “By participating in the themes it just makes things more fun. And it makes it look better as a student section I think.”

He thought “The Herd” helped spur the EPHS girls’ volleyball team once again this fall, assisting the Townies in their run to the Division II championship match.

“The girls’ volleyball team, I think that was something huge for us. I think they kind of fed off our momentum, off our energy. I think it kind of helped them make their playoff push,” Russo said.

Fellow “Herd” member and standout tennis player Hope Moran gave credence to that notion, saying she and her teammates on the EPHS girls’ squad were aided by the numerous peers who urged them on as they reached the Division III finals as well this fall.

“That was insane,” Moran, a promising freshman and the Townies’ No. 3 singles players this past fall, said of the support her side got from “The Herd.” “I mean, tennis doesn’t usually get that much of a turnout. You wouldn’t have thought we lost the championship with all of the cheering. It was an incredible moment. I don’t think it would have been such an amazing experience if we didn’t have ‘The Herd.’ With them being there it was just amazing.”

Senior Jack McKnight, an EPHS baseball captain, said he signed up for “The Herd” to get more involved in the school community and is anticipating his team getting similar backing next spring when the new diamond opens on campus.

“I hope we’ll get more support this year because our field is now right at the school,” McKnight said. “But for me, this about supporting my fellow student athletes. It’s been really positive and I think it’s really brought a positive attitude to the school as a whole.”

Junior Sophia Muhl, who said she sees “The Herd” as a vehicle to bring her peers together and create more school spirit, wants those coming up through the system will continue to build on the momentum of built the last year-plus.

“We would just like the younger kids to follow in our footsteps, have all the underclassmen participate in things like spirit week, the themes and show up to the games,” Muhl added.

Andrade said “The Herd” has already proven to be a motivating factor in getting some kids to not only attend sporting events, but just get to school.

In the end, though, the basic premise of “The Herd” is to create a vibe for the entire school, but specifically for sporting events.

As he looked around the gym inside the now 18-month-old new EPHS building, Riel said, “Honestly, what I want is for other teams to be scared to play when our fan section is here. I want them to not want to play us when we’re here.”