Despite being legally blind, Sanchas has now run 14 marathons, including the most recent Boston Marathon, and has competed and won gold medals in some of the top adaptive sports competitions in the country. 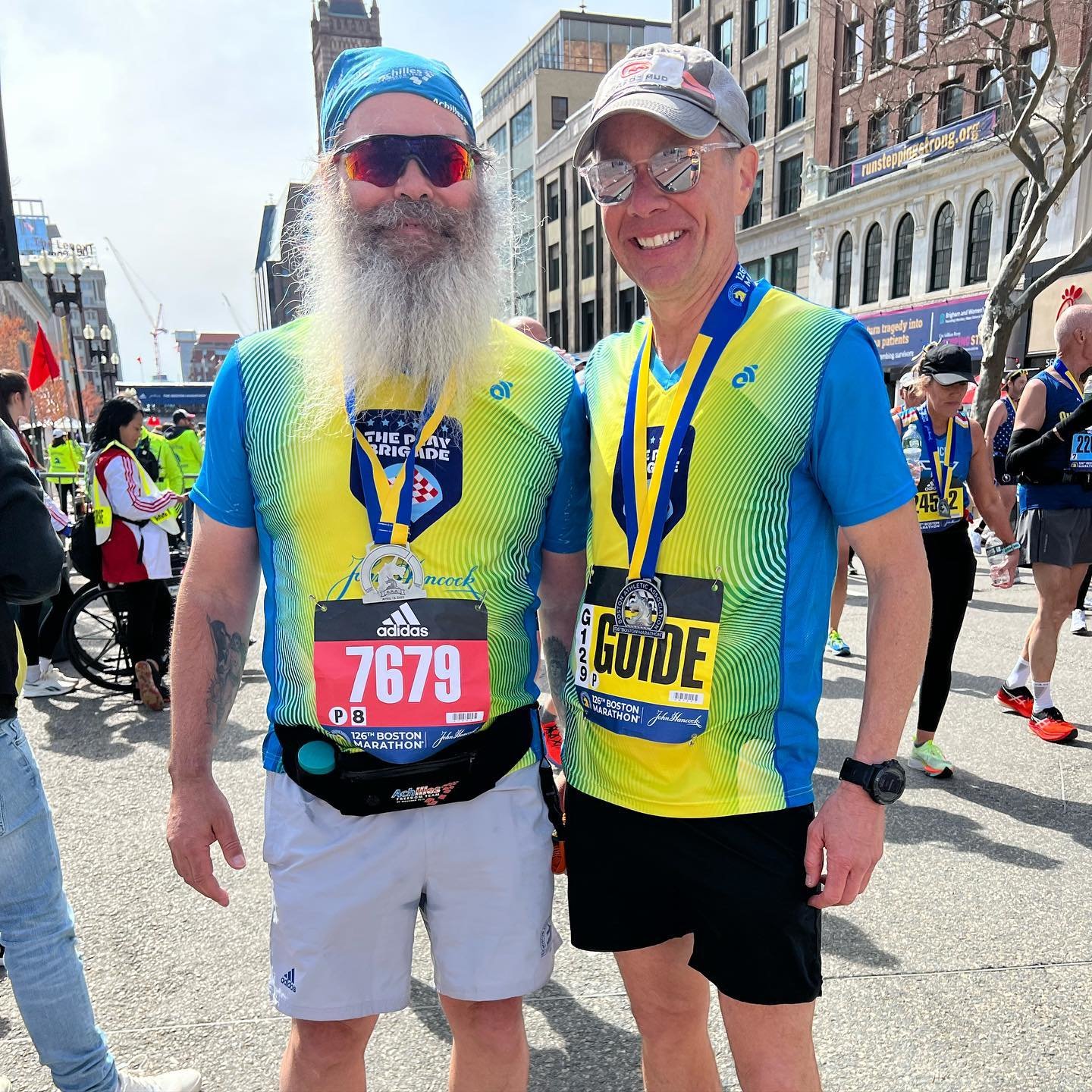 Robert Sanchas and his running guide, Jeremy Howard, after finishing the 2022 Boston Marathon. It was the 14th marathon Sanchas has completed since beginning adaptive running in 2016. 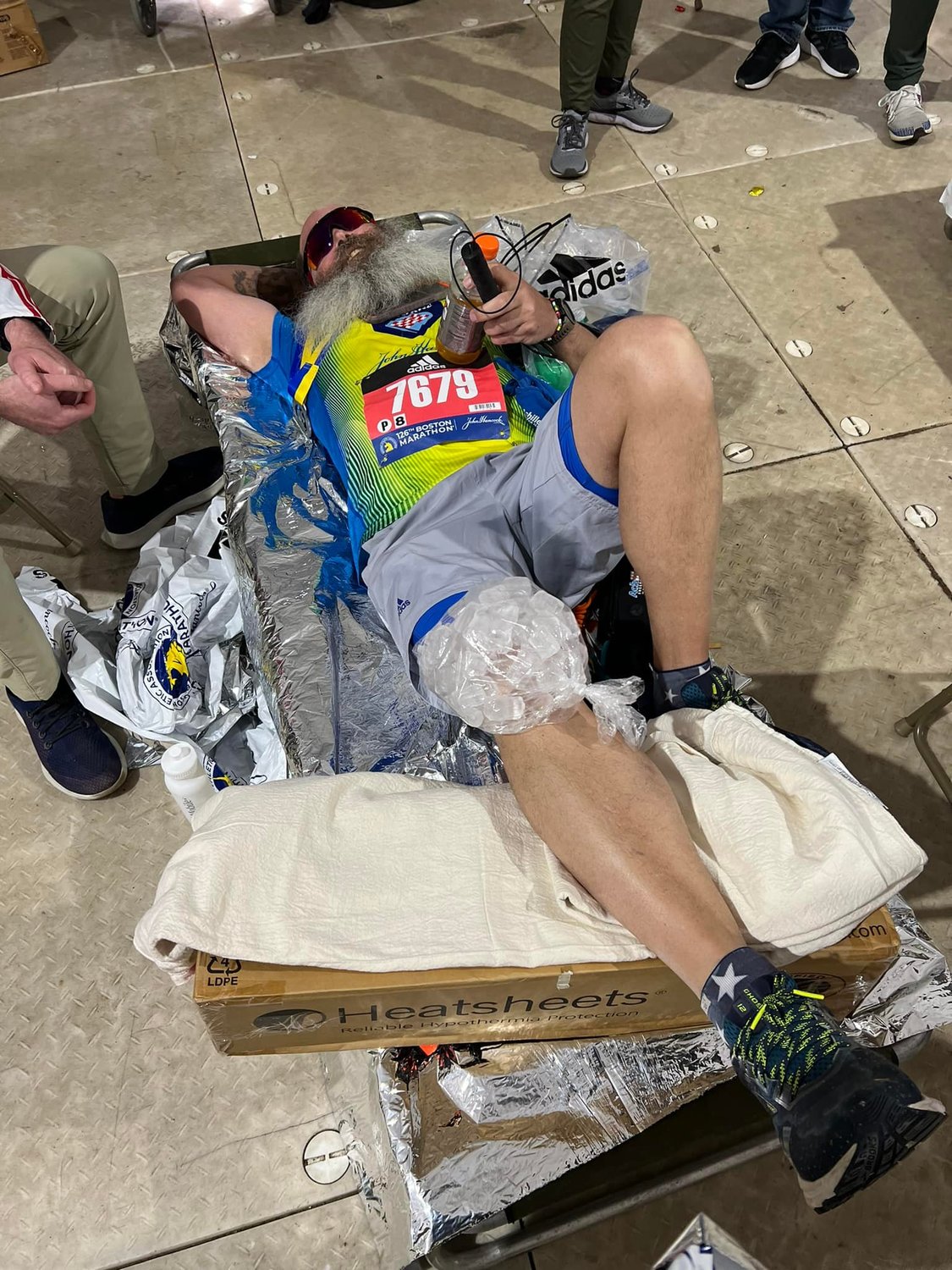 Sanchas ices his knee down after completing the 126th Boston Marathon.
Previous Next
Posted Thursday, June 23, 2022 12:59 pm
By Ethan Hartley

Some people search a lifetime for a purpose that gives their lives meaning. For Warren native Robert Sanchas, it took losing his vision — and struggling through a period of literal and psychological darkness — in order for him to be able to truly see.

Despite being legally blind, Sanchas has now run 14 marathons, including the most recent Boston Marathon, and has competed and won gold medals in some of the top adaptive sports competitions in the country.

A freak accident, and a life-saving choice
Sanchas joined the Army straight after graduating high school in 1986, inspired by a quadruple-amputee Vietnam veteran he met as a child, and became a communications specialist and air traffic controller. Three years into his contract, a freak accident involving a bungee cord resulted in the loss of 25 percent of his right eye and an accompanying head injury, the severity of which would only become apparent many years later.

Despite the accident, he was able to finish his contract with the Army and then moved to Germany in 1994, where he worked in a factory conducting aluminum layering work. In 2002, he decided to move back to Warren to be closer to his aging parents. He worked temp jobs, mostly in warehouses where he was experienced with forklifts. Then, around 2008, the full consequences of the injury he sustained nearly 20 years prior began to surface.

“It started to get really bad and they kept giving me glasses. I went through seven pairs of glasses in less than a year. I was seeing four of everything,” he said.

By 2010, Sanchas was told he’d never drive again, and that his visual deterioration was not going to improve. Understandably, the realization took a toll on him.

“I locked myself up in my room for a few months,” he said. “I was never leaving my room except to go to the bathroom and was just sitting there in the dark pretty much in my misery. I didn’t know what to do.”

Unable to cope with his new disability, Sanchas injured himself falling down his stairs on multiple occasions. After an emergency room doctor told him he had to take measures to prevent such injuries, Sanchas realized he was at an important crossroads in his life.

Sanchas contacted his local VA, and was set up with a cane and taught how to use it. He was hooked up with resources that helped improve his vision to a point where he was no longer seeing quadruple — a solution he laughs while reminiscing was as simple as blocking out one eye with a dark lens.

Sanchas had priorly tried to get into engineering, but pivoted into an educational career and got his teaching degree from Rhode Island College, and began substitute teaching in the East Providence public school system. He is now waiting on receiving a second degree in the mail from UMASS Boston, having completed a master’s program last month in instructing students with visual impairments.

Living without limits
The most transformational connection Sanchas made was with Achilles International, a global organization founded in 1983 that empowers athletes of all ages and ability levels to participate in endurance events around the world. They claim to have assisted over 150,000 people compete in adaptive sports since their inception.

Sanchas, who participates with the Achilles Freedom Team — a program begun in 2004 that includes wounded, ill or injured members and veterans of the U.S. military — said that he has found peace through running, which he achieves through a tethered connection with a volunteer guide.

“At first it was weird because you’re literally putting your life in a stranger’s hands. I call them superheroes. They give so much time and they ask for nothing,” he said. “I hated running in the military, but once I started doing it, I started enjoying it. I started realizing what a relief it is. I can close my eyes and just run.”

Since getting involved in running, Sanchas has gone on to compete in skiing, surfing, rowing and kayaking. This Saturday, he will compete as a sponsored runner in the Gaylord Gauntlet Trail and Obstacle Run in Connecticut, a fundraising obstacle course 5K to benefit the Gaylord Sports Association, a group dedicated to improving the lives of individuals with physical disabilities through adaptive sports and recreation.

“Trying things becomes really addictive,” he said. “I was thinking about giving up on everything. When you lose your vision, you can’t do anything but sit in the dark. Well I did that, sitting in the dark. And it really isn’t that fun. Then I met the right people and I thought, well why can’t I do that? The way I feel doing it, there’s nobody that can take that away from you.”

Looking back on his journey, from total despair to trying and conquering whatever opportunity lies ahead of him, Sanchas said the most important thing anyone in a similar situation to his can do is make that choice to reach out for a helping hand.

“You have to make that choice. That’s the hardest part,” he said. “Everybody thinks they can do it on their own, but you have to make that choice and reach out. There are many organizations out there to help you…At the beginning you’ll have everything stuck in your head. All you’ve learned your whole life about things you can’t do. And if you make the choice that that’s how you want to live, you’ll be stuck there.”

Sanchas made his choice, and he plans to keep making them as different opportunities arise.