PORTSMOUTH — Speaking under a tent in the center of Butts Hill Fort on Saturday, Craig Clark recalled his days as a Portsmouth High School student, “about 40 years and 600 … 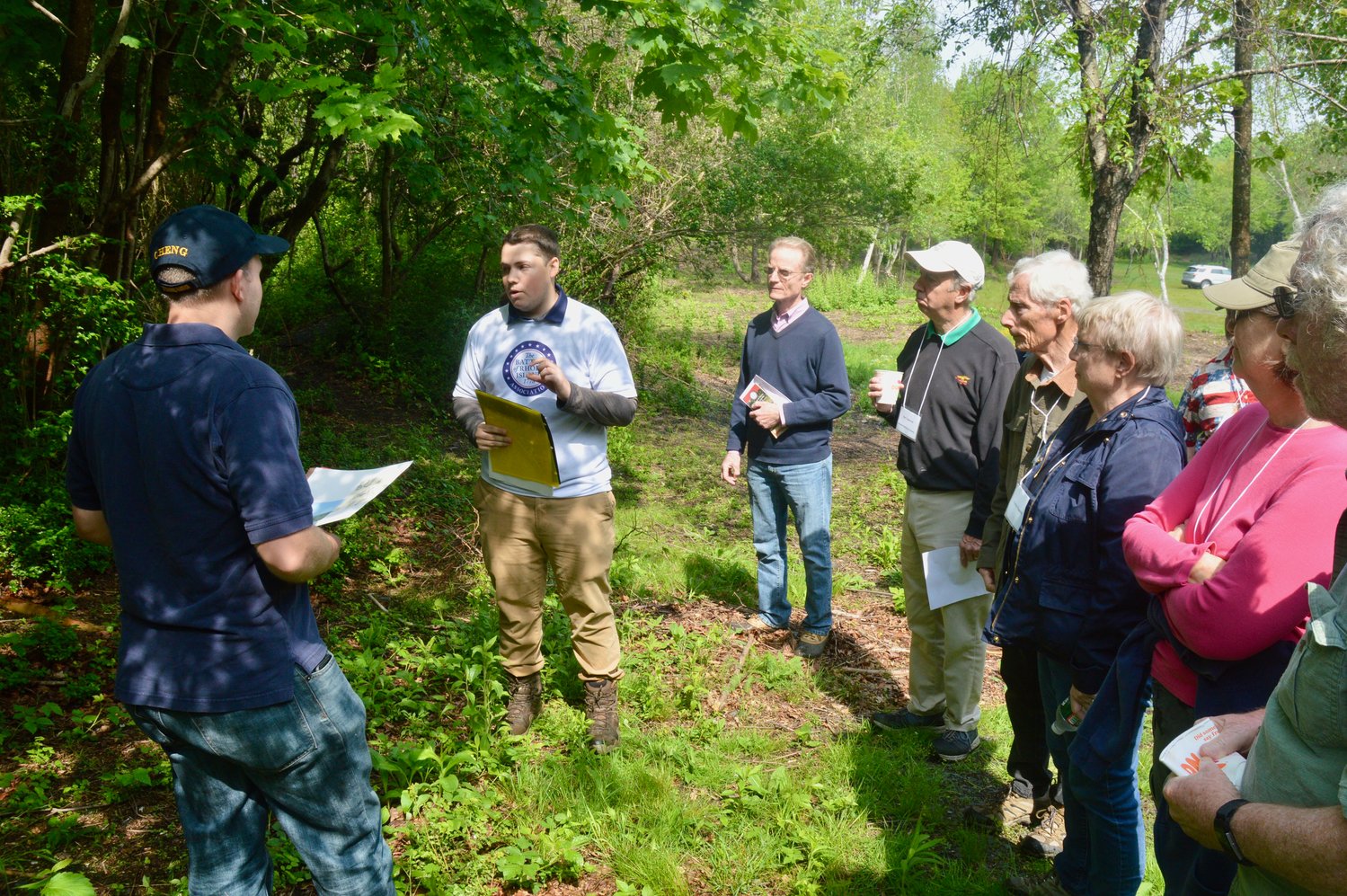 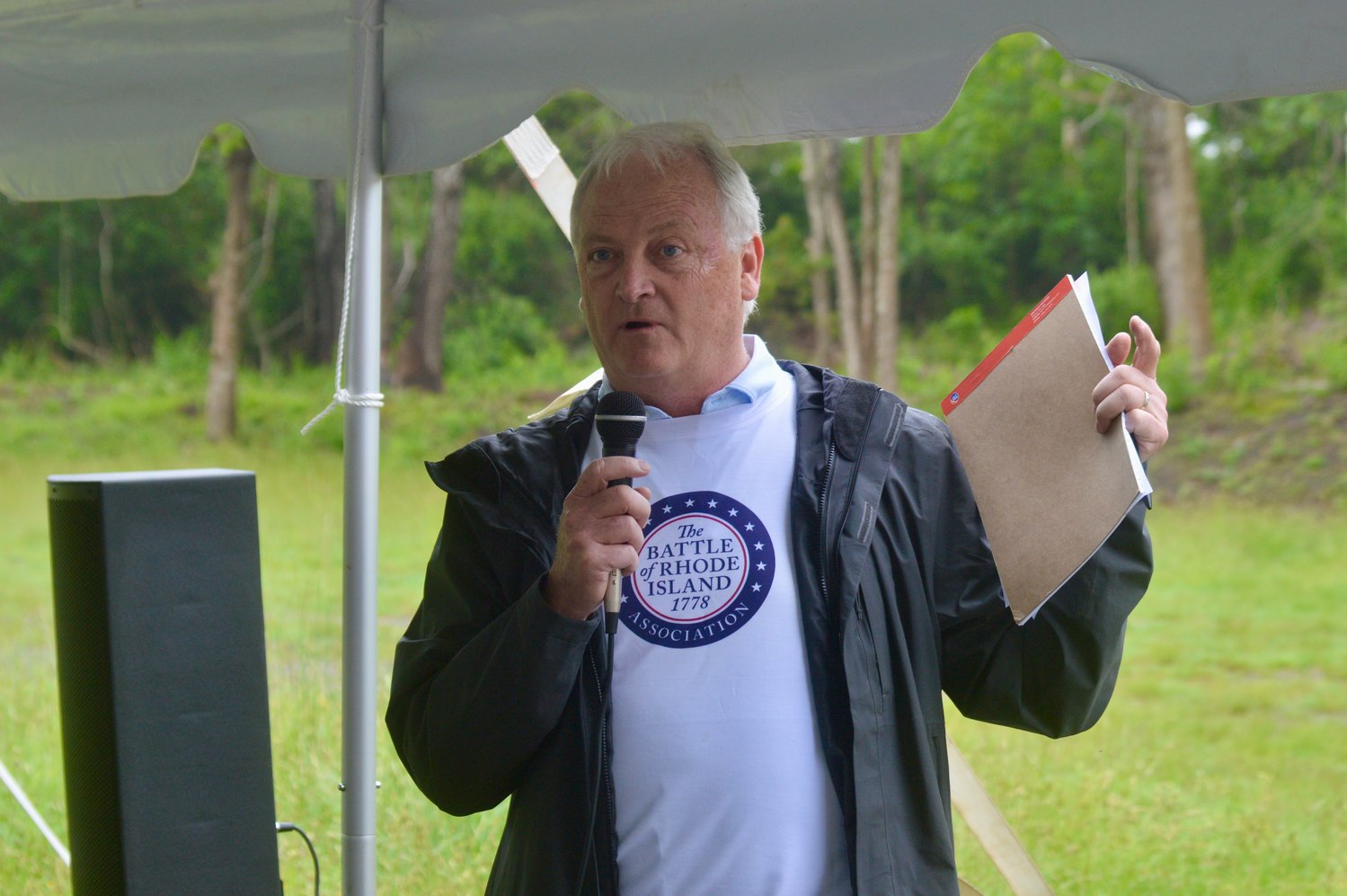 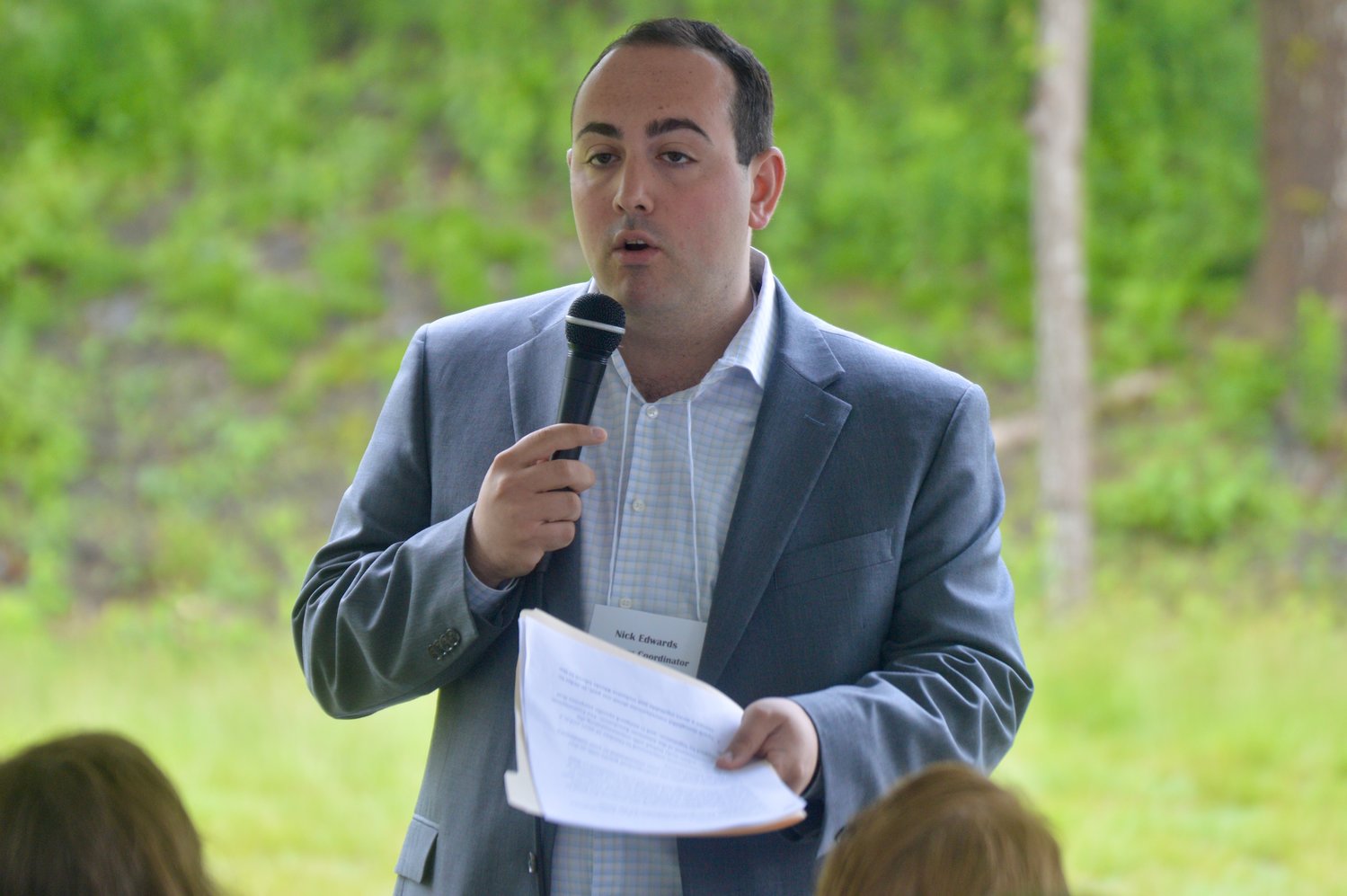 Nick Edwards, the program coordinator for the Rhode Island 250th Commission, was the guest speaker on Saturday.
JIM MCGAW 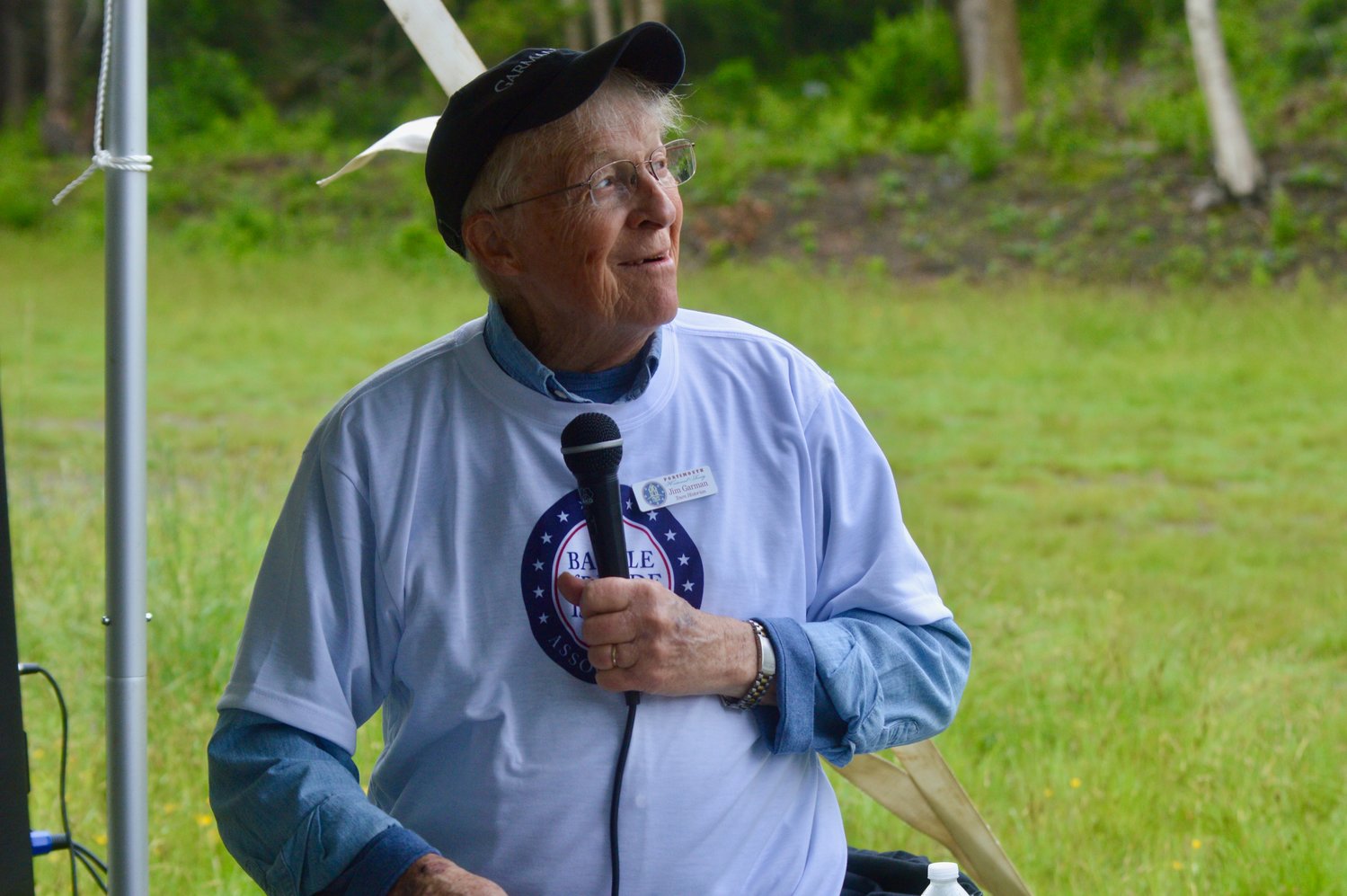 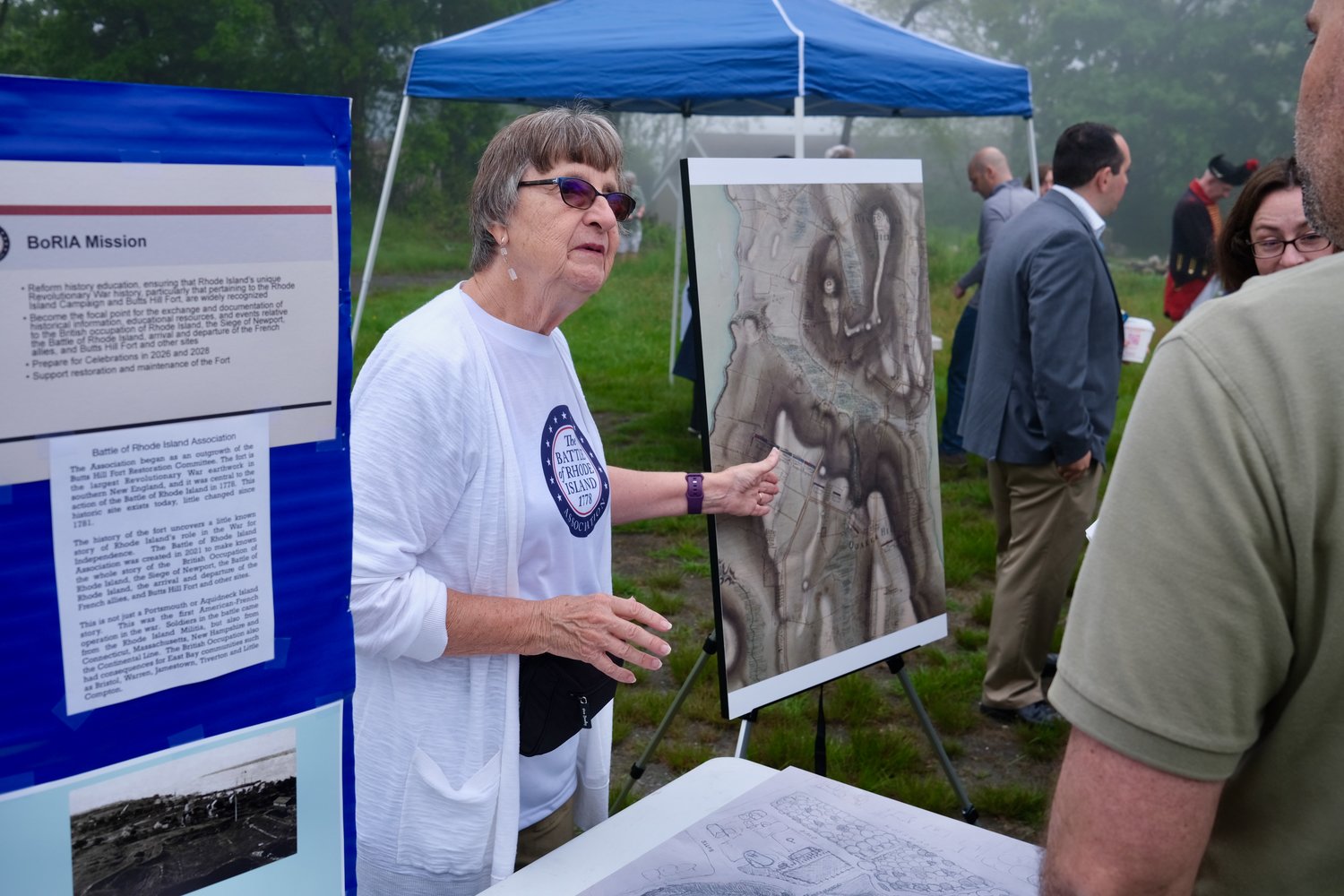 Gloria Schmidt, who has written extensively about Butts Hill Fort, shows visitors a map of the area.
JIM MCGAW 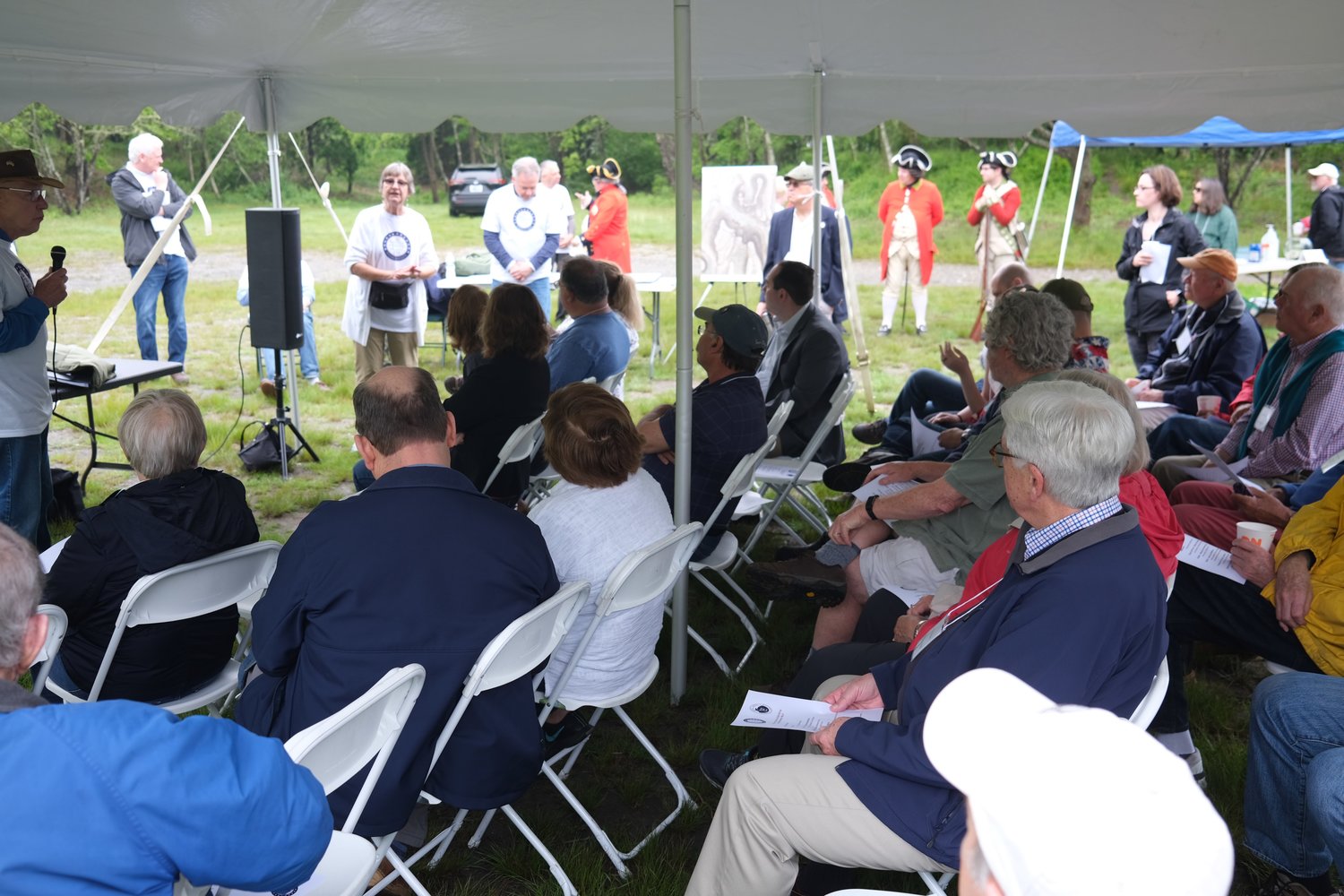 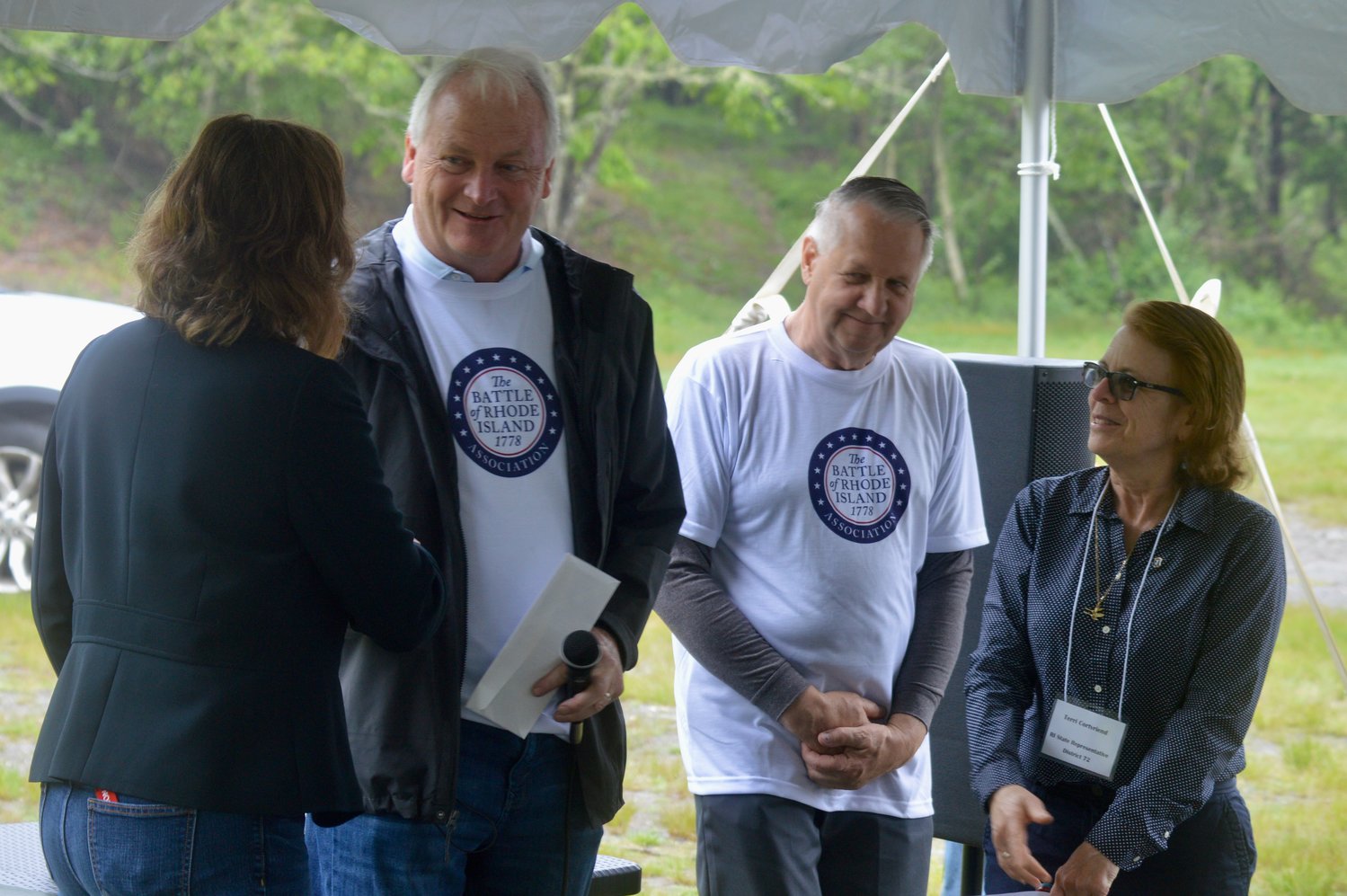 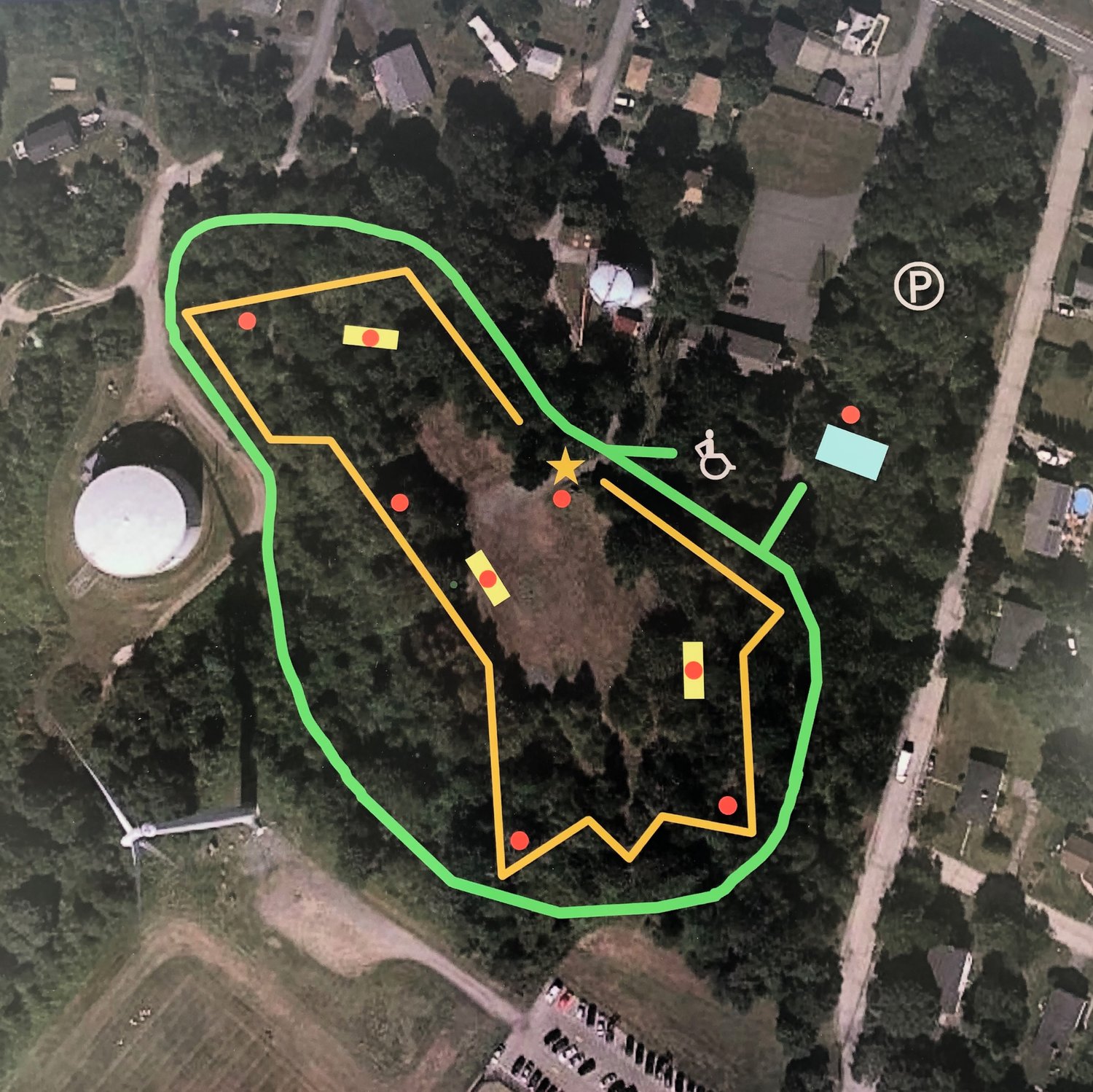 PORTSMOUTH — Speaking under a tent in the center of Butts Hill Fort on Saturday, Craig Clark recalled his days as a Portsmouth High School student, “about 40 years and 600 yards” from where he was standing.

“I sat in Mr. Richards’s U.S. History class,” Clark told about 60 people who had gathered for “Coffee and Donuts at the Fort,” the first public information event held by the Battle of Rhode Island Association (BORIA) and the Butts Hill Fort Restoration Committee (BHFRC). “I learned about Paul Revere and his famous ride, the signing of the Declaration of Independence, and George Washington crossing the Delaware.”

But something was missing from his history lesson.

“What I didn’t learn was that they were all here in Portsmouth,” said Clark, BORIA’s director. “There are records of Paul Revere being stationed here for cannon works, John Hancock being in the area, and of course George Washington riding from Newport across the Bristol Ferry and down to Yorktown.”

Sadly, too few people know about Portsmouth’s significant role in the Revolutionary War, Clark said. But the volunteers behind the effort to restore Butts Hill Fort, the largest existing Revolutionary War earthwork in southern New England, are determined to change all that.

For the past two years they’ve been cleaning up the area — removing select trees and other vegetation so the original sight lines around the perimeter are now visible — in time for the 250th anniversaries of the Declaration of Independence in 2026 and of the Battle of Rhode Island in 2028.

Butts Hill Fort was built in 1776 by Colonial militia. It was used by the British when they occupied Aquidneck Island and later by French forces when they arrived as allies to support the Continental Army. During the Battle of Rhode Island in August 1778, The Fort was the headquarters of the Colonial forces under Gen. John Sullivan. The battle is often noted for the participation of the 1st Rhode Island Regiment (The “Black Regiment”).

On Saturday volunteers made their pitch to Rhode Island and local politicians, officials from various towns, heritage groups, and historical societies. Several uniformed re-enactors from the 54th Regiment of Foot, one of the British units that participated in the occupation of Rhode Island, were there to lend a Revolutionary War atmosphere to the proceedings.

“Rhode Island has so much history that many are not aware of. Now’s the time for the Ocean State to claim its stake in the American Revolution,” said Nick Edwards, Secretary of State Nellie Gorbea’s program coordinator for the Rhode Island 250th Commission, which is gearing up to celebrate the 250th anniversary of the burning of the Gaspee in defiance of British authority on June 10, 1772.

The event that sparked the Revolution “was not that small event in Boston, Massachusetts in 1773,” Edwards deadpanned, referring to the Boston Tea Party. “It was right here in the Ocean State.”

Burton Quist, BHFRC director, updated everyone on the development of a master plan, required by the town, which has begun with a survey of the property and a contract for a landscape architect experienced in historic sites.

A second priority is the development, already underway, of a website for an exchange of information of not just the fort and the Battle of Rhode Island and the Siege of Newport, “but the Revolutionary War, from beginning to end,” he said.

“We need help. We need funds,” Quist said, noting that volunteers are being sought to do everything from grant-writing to clearing vegetation. Donations may be made payable to “BoRIA” at PO Box 626, Portsmouth, RI 02871, and anyone wishing to participate or donate may contact Nancy Crawford at redhatskrapper@gmail.com.

On Saturday, State Reps. Terri Cortvriend and Michelle McGaw presented the group with a $1,500 legislative grant for its work, and the Town Council donated that same figure from its civic engagement funds for the BORIA master plan.

The group also hopes to develop educational materials that could be used in classrooms, said Gloria Schmidt, who has written extensively about the fort and local history in general.

Town Historian Jim Garman, who gave a brief presentation about the fort, called Butts Hill Fort — so named for a family of farmers who owned the land in the 1600s – a “hidden gem.”

“It’s a really special place and is quite significant militarily, and Revolutionary War-wise. Unfortunately, we haven’t had enough attention given to it, and that’s what we’re trying to do,” Garman said.

Clark said he learned about the fort’s significance only a few years ago. “I can’t help thinking that as a young student, if I had learned about the Declaration of Independence and heard about John Hancock and being able to relate that to me and Portsmouth — I’m right here — what impact that would have been? It wouldn’t have taken another 35 or 40 years to get involved in this historic endeavor,” he said.

“There have been a couple of attempts over the years to restore this, but it hasn’t been maintained. I think that’s one of the most important parts of this — educating our youngsters so they know how important this is, and they’ll keep it going,” Clark added. “We’ve done a lot of work; two years ago, you wouldn’t have been able to see any of the embankments. We envision a day that families will come here and walk the trails and have a picnic, that students will leave the classroom and walk onto the site and learn about the Battle of Rhode Island and the history that it holds.”