Two men with knives carry out thefts in Taunton and Raynham

Two men with knives carry out thefts in Taunton and Raynham 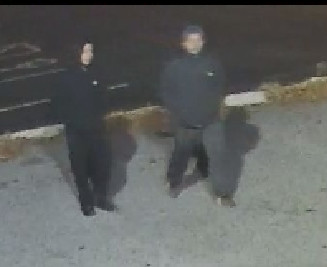 The alleged assailants in the robbery-stabbing incident in city last weekend are considered the prime suspects in two more thefts that took place in recent days in two nearby Southeastern Massachusetts municipalities.
According to East Providence Police detectives, two men who are believed to have stolen cash and used a knife to assault a customer at Town Wine & Spirits in city Saturday evening, Dec. 2, were also the perpetrators of thefts at businesses in Taunton and Raynham.
On Tuesday morning, Dec. 5, at 2:30 a.m., a CVS Pharmacy on Route 44 was robbed of an undisclosed amount of cash by thieves armed with knives. The same scenario played out at about 3:30 a.m. Wednesday morning, Dec. 6, when a Seasons gas station/convenience store on New State Highway reported an armed robbery.
The suspects in both Massachusetts acts fit the descriptions of the two men wanted for the Town Wine & Spirits incident as well as another that also took place December 2 in Pawtucket. The pair is alleged to have committed a robbery at about 8 p.m. Saturday on a Division Street business. They then robbed and stabbed a customer attempting to intervene at Town on Newport Avenue an hour later at approximately 9 p.m.
The investigation is ongoing. Anyone with information on the robbery should contact the EPPD at 401-431-1111.